Master artists share their skills and cultural foundations in a range of textile workshops from weaving to basketry.

Traditional finishing and embellishment techniques will include hand-sewn and machine-sewn welts, bias binding and petersham ribbon bindings. Your hats will be embellished and complemented with millinery ribbons, flowers, silk fabrics, sashes and bows, horsehair, straw braids and other trimmings. We will create unique and fanciful trims from the felt and straw remainders or trimming scraps which would normally be discarded. You can expect to create four to five hats.

Skill Level: All levels
Tuition: $755
Lab Fee: $25 – This workshop’s $25 lab fee includes shared items and the use of specialized equipment. Supplies including hoods/cartwheels, head size ribbons, brim wire, wire joiners, and trims will be available for purchase in class. Prices will vary depending on your design/materials choices. You will be asked to bring additional materials.
Materials List: Coming Soon
Enrollment limited to 10 students

Wayne Wichern’s 34-year millinery design and teaching career evolved out of his experiences as a floral designer and classical ballet dancer and his interest in fashion and costume design. His professional talents as a celebrated hat designer are apparent when following the winding path of creative and artistic endeavors he has mastered. His elegant hats have sold at Barney’s NY and Nordstrom; he has created hats for theater and ballet productions; and his innovative hat designs are in museum collections and are featured in numerous magazines and books.

Porcupine quill embroidery is a true American art form. Long before glass beads from Europe were exported and traded in the Americas, a large number of natural materials were used for the adornment of traditional regalia. In this workshop, you will engage in the entire process of quillwork. Join us as we experience the quill art process from cleaning to applying as an embroidery fiber. You will create your own smoked, brain- tanned deerskin drawstring pouch with embroidered quill adornment.

You will begin by removing quills from guard hairs from a porcupine pelt and washing the quills to remove dirt and oil, then sorting the quills according to size for embroidery, wrapping and stringing methods. You will also dye quills using vegetal and commercial dye baths.Once quills are prepared, you will engage in practice exercises and learn the zig zag, banding outline, and single quill line embroidery methods.

Melanie Sainz (Ho-Chunk Nation of Wisconsin) has worked as an art educator in both public and private schools for over 30 years. As an artist who enjoys teaching about art, Melanie strives to educate students about appreciating art through the lens of the art maker. Her artwork has been shown in exhibitions throughout the US, and she has won awards at prestigious art markets including the Eiteljorg Museum and the Heard Museum. Melanie is Executive Director of Little Eagles Arts Foundation, which is a non-profit organization dedicated to preserving the arts and culture of Native people through providing quality cultural arts education programming. 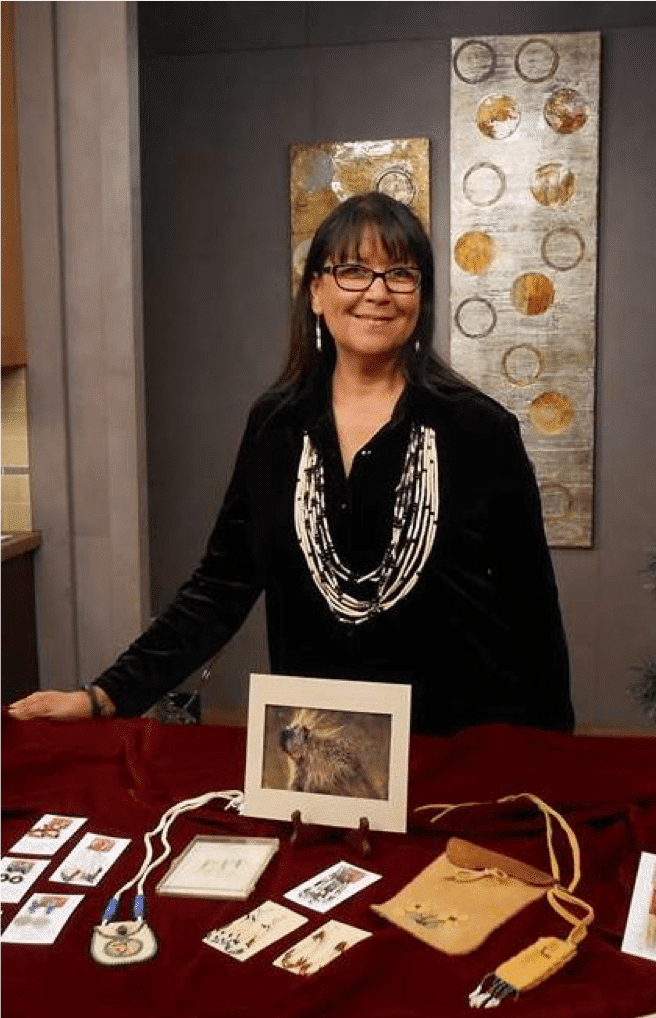 Navajo Weaving I and II: Beginning and Intermediate

Learn the art of weaving from master Navajo weavers Barbara Teller Ornelas and Lynda Teller Pete, originally from Two Grey Hills and Newcomb, NM. While instructing and demonstrating, sisters Barbara and Lynda will share their family’s personal weaving stories and experiences, giving you a view into the world of Navajo weaving.

According to Navajo oral tradition, two holy people, Spider Woman and Spider Man, introduced weaving to the Navajo. Spider Man constructed the first loom, which was composed of sunshine, lightning, and rain; and Spider Woman taught the people how to weave on it. Spider Woman was discovered by the Holy Twins, the culture heroes of the Navajo Creation Story, in a small opening in the earth surrounded by an array of beautiful weavings. Entering her dwelling, the Holy Twins descended a ladder made of yarn, whereupon Spider Woman offered them knowledge of the world of weaving.

Beginners: Learn the traditional method of Navajo weaving and begin weaving with a pre-warped, upright Navajo loom. The majority of the week will be spent designing and learning how to weave a 12” x 16” rug. This beginners session includes a lesson on warping a loom. You may enroll for the full two weeks or only the first week.

Intermediate: If you have taken the course or have basic Navajo weaving training on an upright loom, you will explore more advanced techniques and patterns, and your rug may be any size. Bring rugs from previous summers to complete, or begin a new rug. You must bring your own loom, and set up for weaving before class begins. Or, you may order a pre-warped loom when registering online. You may enroll for the full two weeks or only the second week.

Navajo weavers in regional areas of the Navajo Nation have been dyeing wool for their weavings to create beautiful rugs, tapestries, throws and blankets. Early Navajo weavers began using natural plant dyes as far back as the 1700s and have continued to employ varying methods to produce an array of color, shades, hints and hues. Plants are gathered according to seasons to get different hues. In modern times, we use kitchen scraps and dried dye matter and grind them before use. Students will choose white wool or some colored wool for over-dyeing, and will then tie and immerse it in alum. The second day, we will extract dye by boiling onion skins, Navajo tea, cochineal, logwood, and brazil wood, and letting them cool in stainless steel pots. On the third day, we will immerse the wool and students can get a chance to experiment with their dyeing.  All supplies and equipment are provided.

Tuition: $755 per week
Skill Level: Week I – All levels; Week II – Intermediate or completed Week I

Lab Fee: $80 – For Beginners, the $80 lab fee includes the use of a pre-warped loom and all tools in class and four skeins of wool. Looms, additional wool, battens and combs will be available for purchase. For Intermediate students, there is no lab fee; wool and warp will be available for purchase. Option to order a pre-warped loom to use in class for $45 when you register online.
Materials List: Coming Soon
Enrollment limited to 10 students per week

Barbara Teller Ornelas (Diné) is best known for her ultra fine Navajo tapestry weavings (95–120 weft threads per inch). She has set several records with her weavings, winning Best of Show at the Santa Fe Indian Market twice; she set a new record in 1987 by selling a weaving for $60,000 that she and her sister Rosann Lee made; and she wove the largest tapestry-style Navajo weaving on record. Barbara is a fifth-generation weaver who was raised near Two Grey Hills, AZ. She has been featured in National Geographic, Business Week, Americana and Native Peoples magazines, as well as many books. She has won dozens of awards, and has demonstrated and lectured at many museums and institutions around the world.

Lynda Teller Pete (Diné) began weaving at age 6 and won her first major award at age 12 at the Gallup Inter-tribal Ceremonial Art Show in Gallup, New Mexico. She has gone on to win many awards for her weaving, including Best of Classification for Textiles at the prestigious Santa Fe Indian Market. Lynda collaborates with museums, schools and art venues in Colorado and around the country to teach about Navajo weaving. She is also known as an accomplished beadwork artist and has won many awards for this work. Barbara and Lynda published their first book, Spider Woman’s Children: Navajo Weavers Today, in 2018. 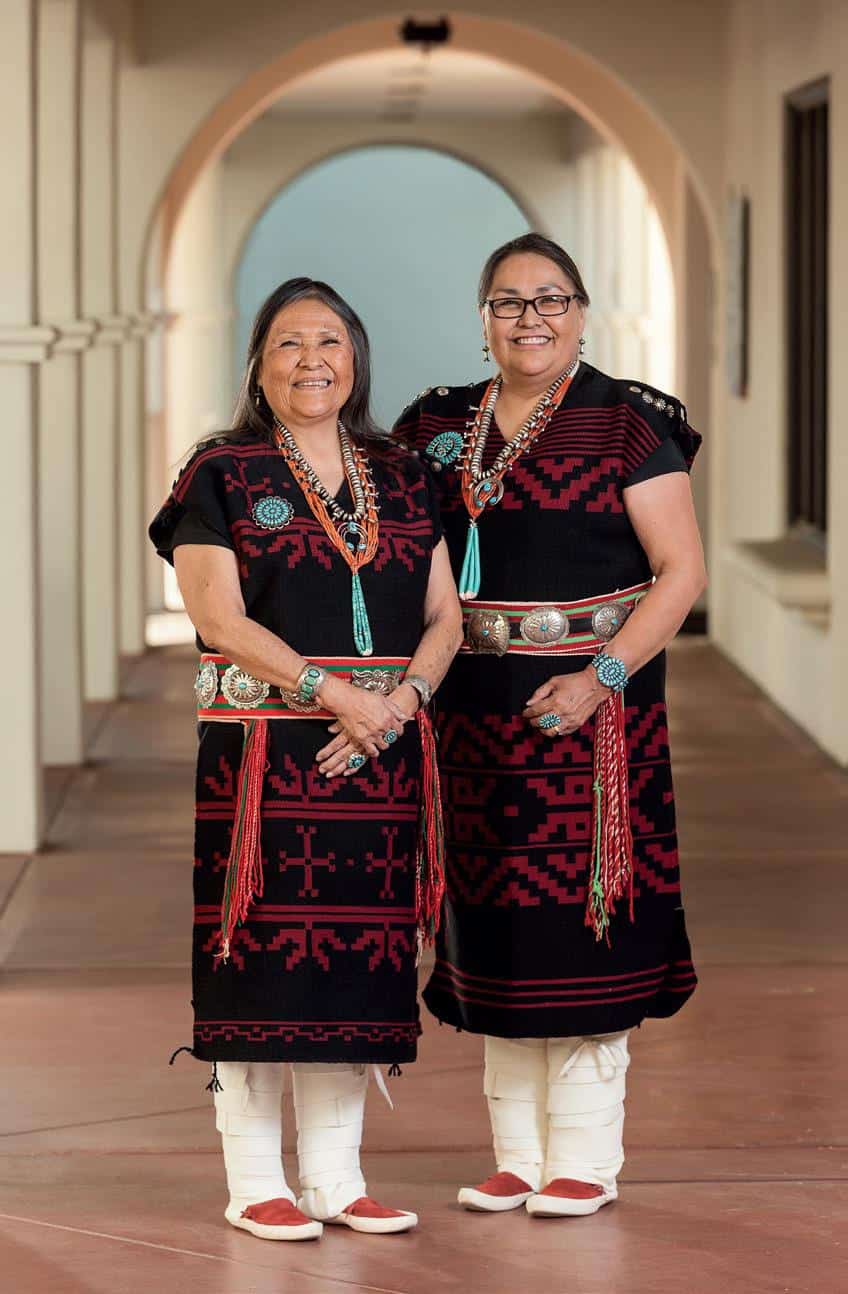 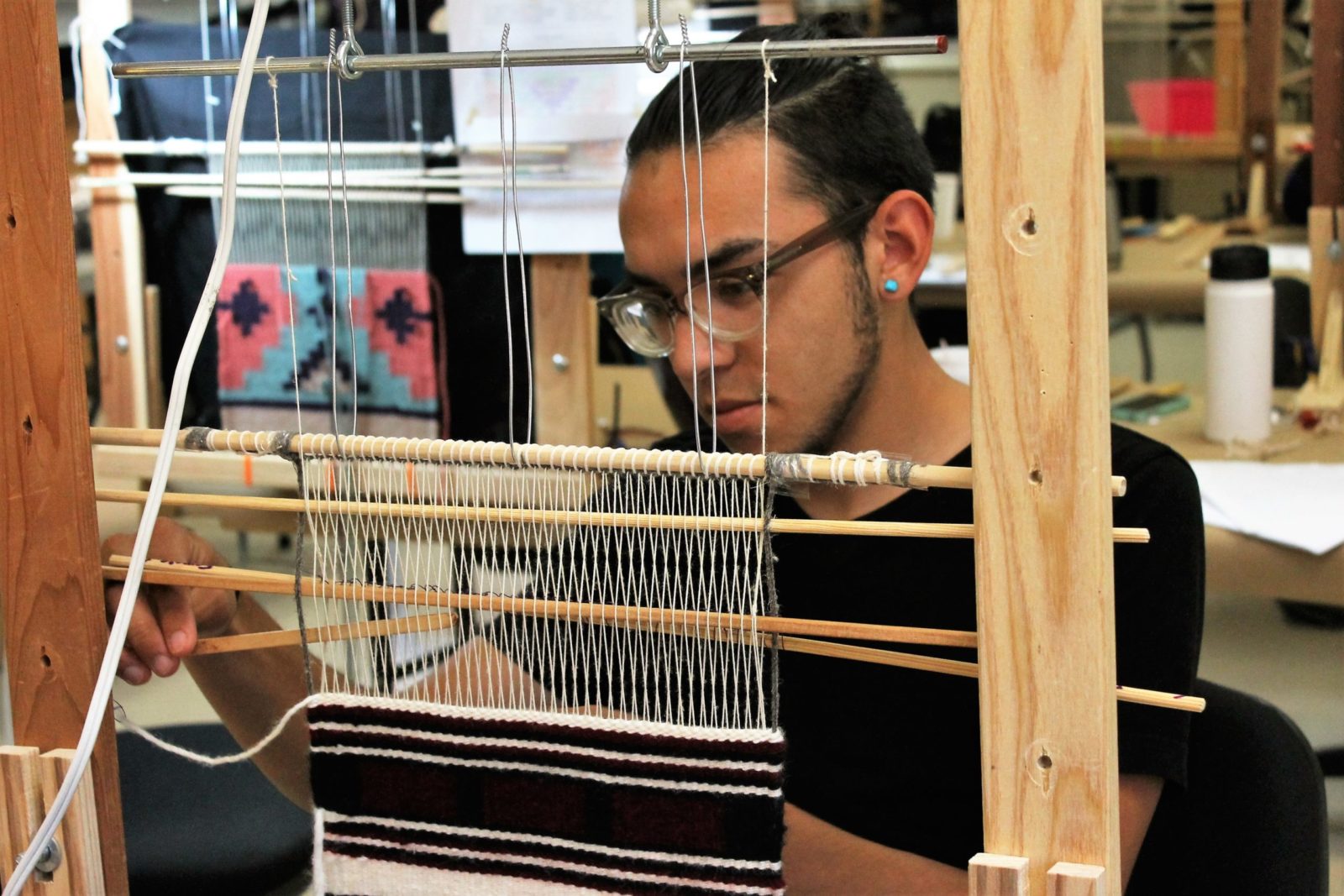 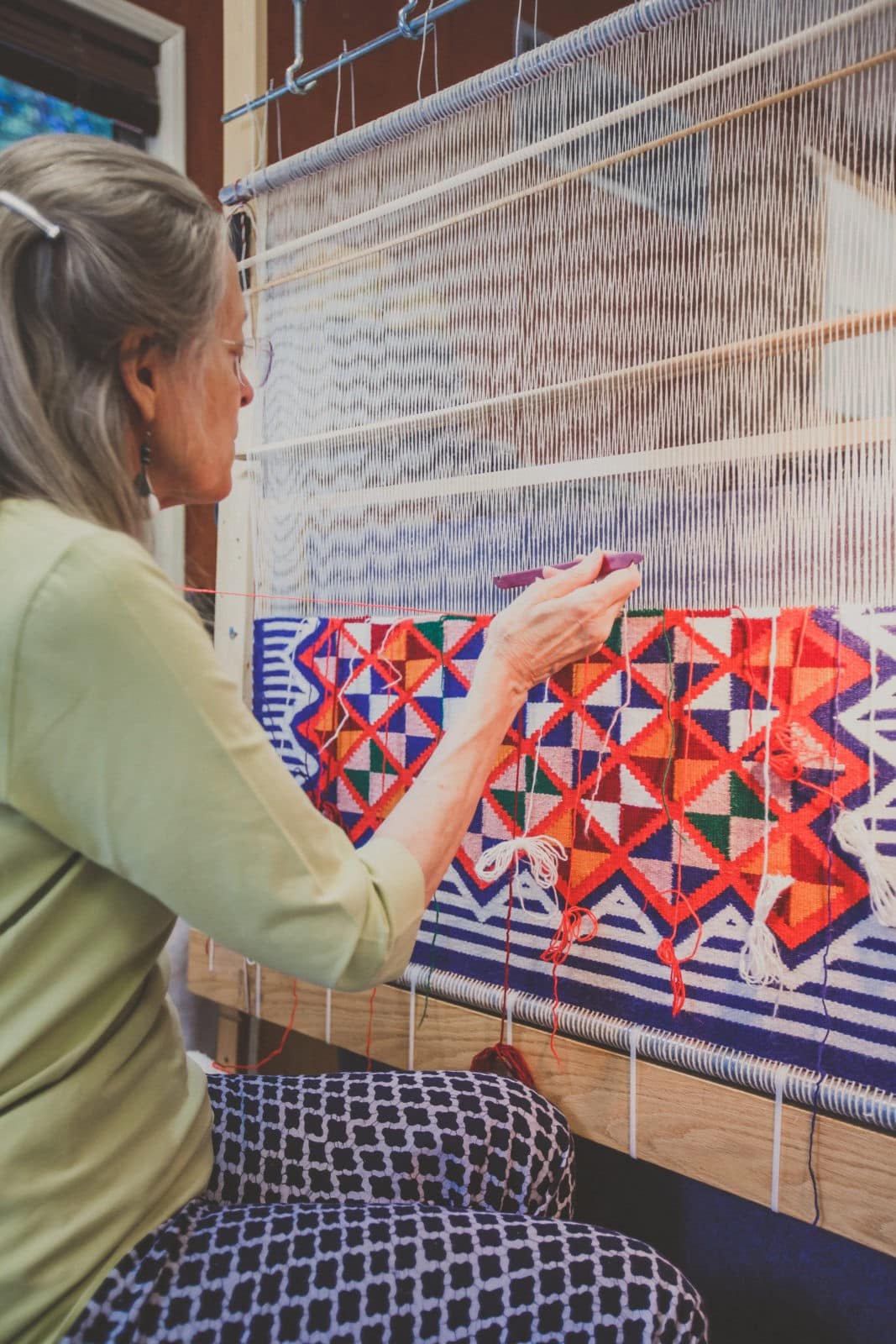 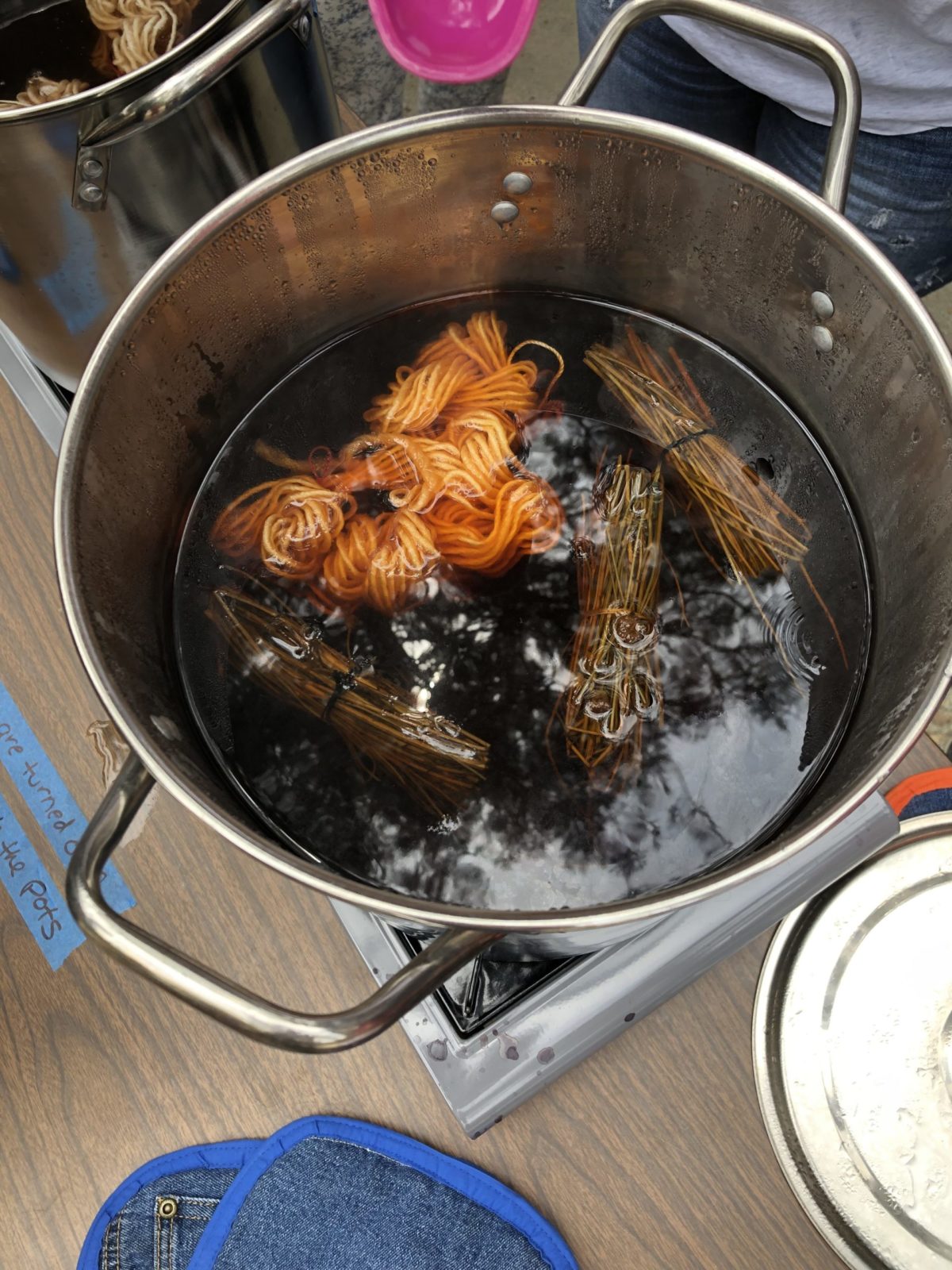 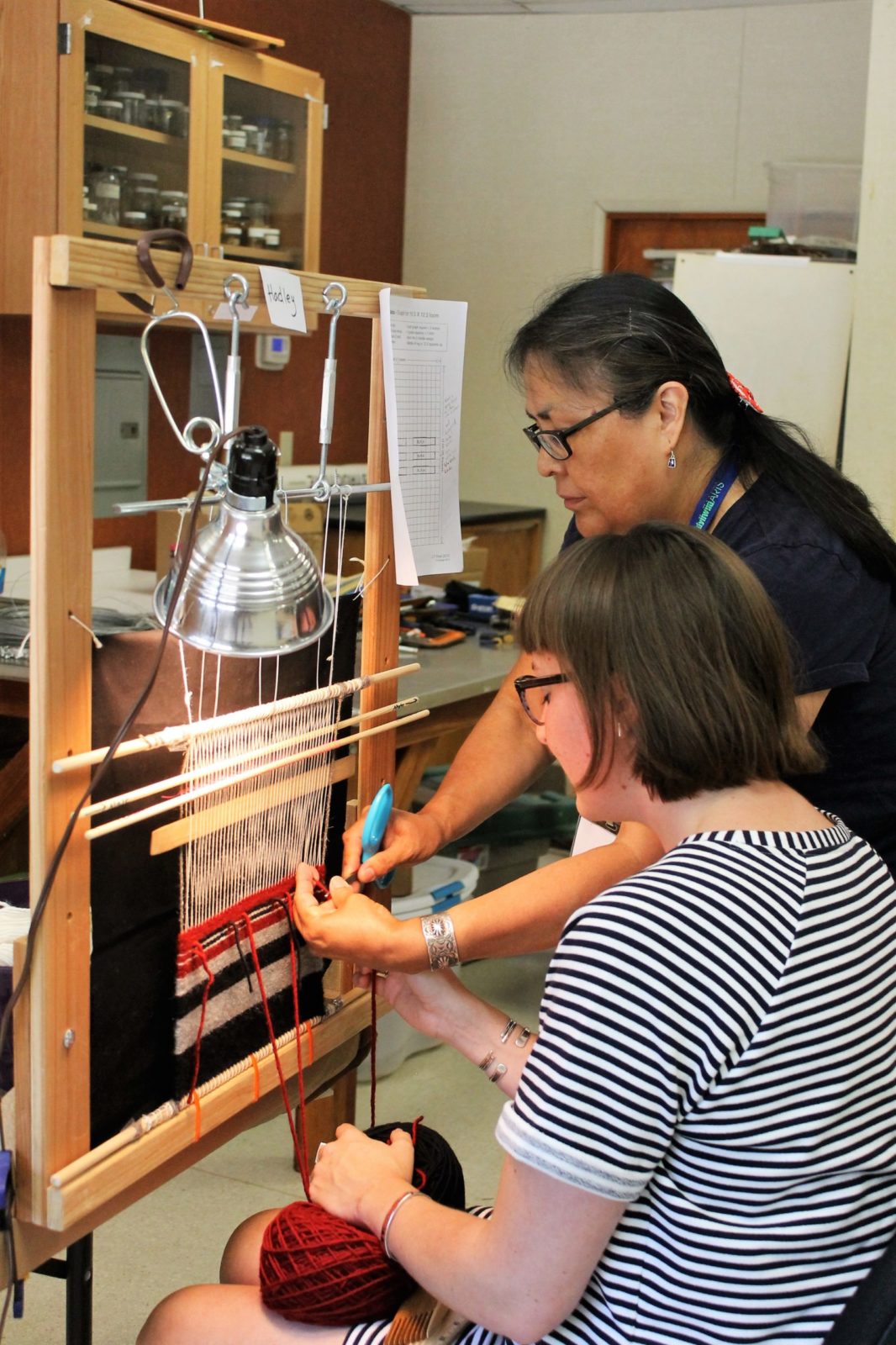 In this three-day workshop, you will be introduced to the beadwork designs and techniques of Jennifer Ben, master Navajo beadwork artist. Using quality materials and detailed hands-on instructions and demonstrations, you will design and construct a beaded cuff bracelet from start to finish. You will design your bracelet, set up your own bead loom, and begin beading with glass seed beads, problem-solving at each step. You will learn to cut, file and shape the brass cuff insert, and after completing the loom-beaded strip, you will tie off warp ends, prepare and cut your leather backing, and put the three elements together to complete your bracelet.

In order to finish your piece, you are encouraged to continue beading in the evenings. With time permitting, Jennifer will instruct you on how to create loom beading projects that can be made into earrings and other accessories.There will be ongoing informal critiques throughout the workshop to support completion and success for all students.

Jennifer Ben (Diné) is from Shiprock, NM and is a student at both Arizona State University and Mesa Community College studying music theory and cello performance. Jennifer has worked extensively as an artist in residence and demonstrator at the Heard Museum in Phoenix, AZ, and has participated in the Heard Museum Indian Fair and Market. Her work reflects her various passions such as music, food sovereignty, traditional farming methodologies, and Diné philosophy, as well as taking inspiration from master artists around the world. 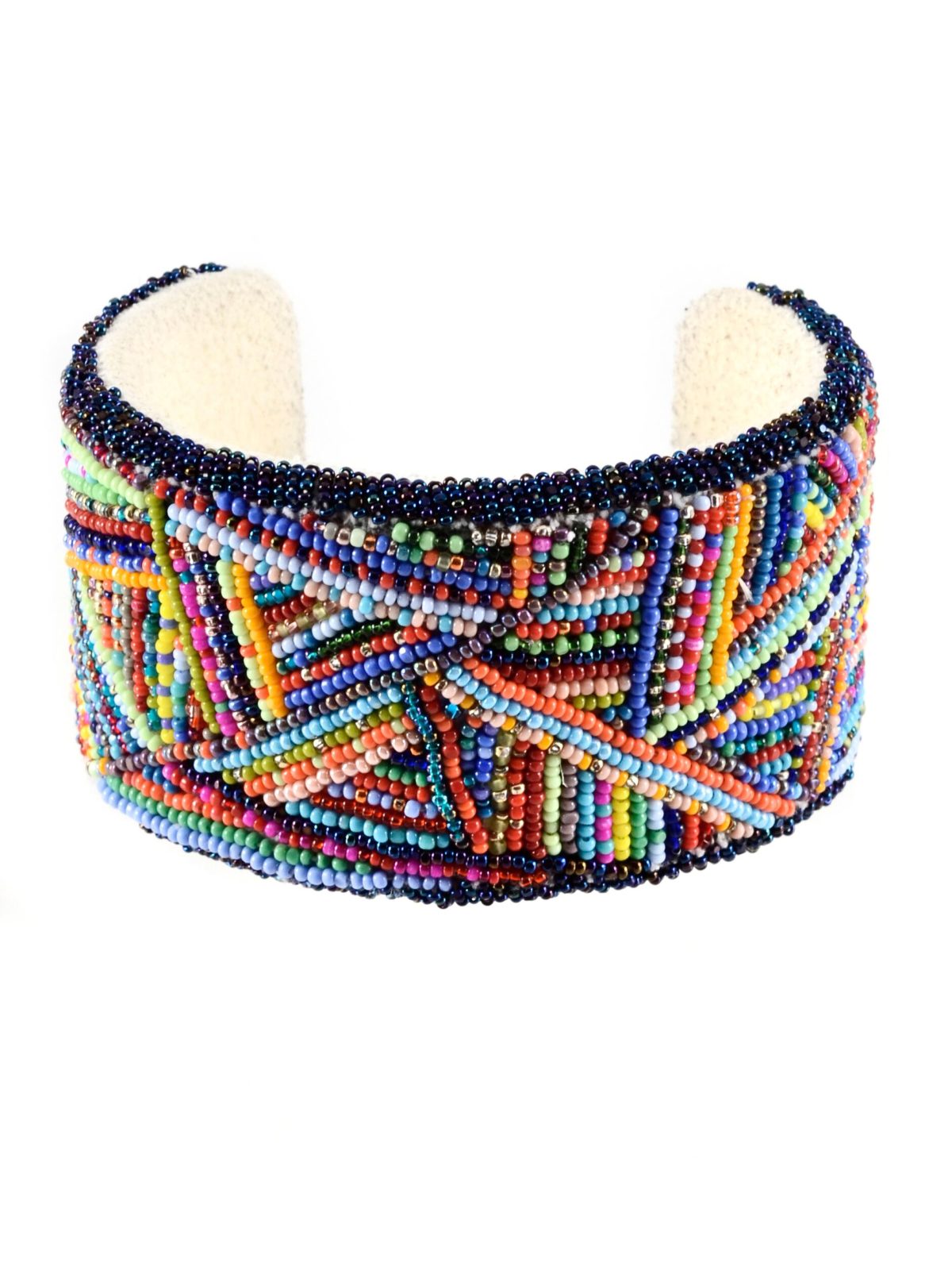 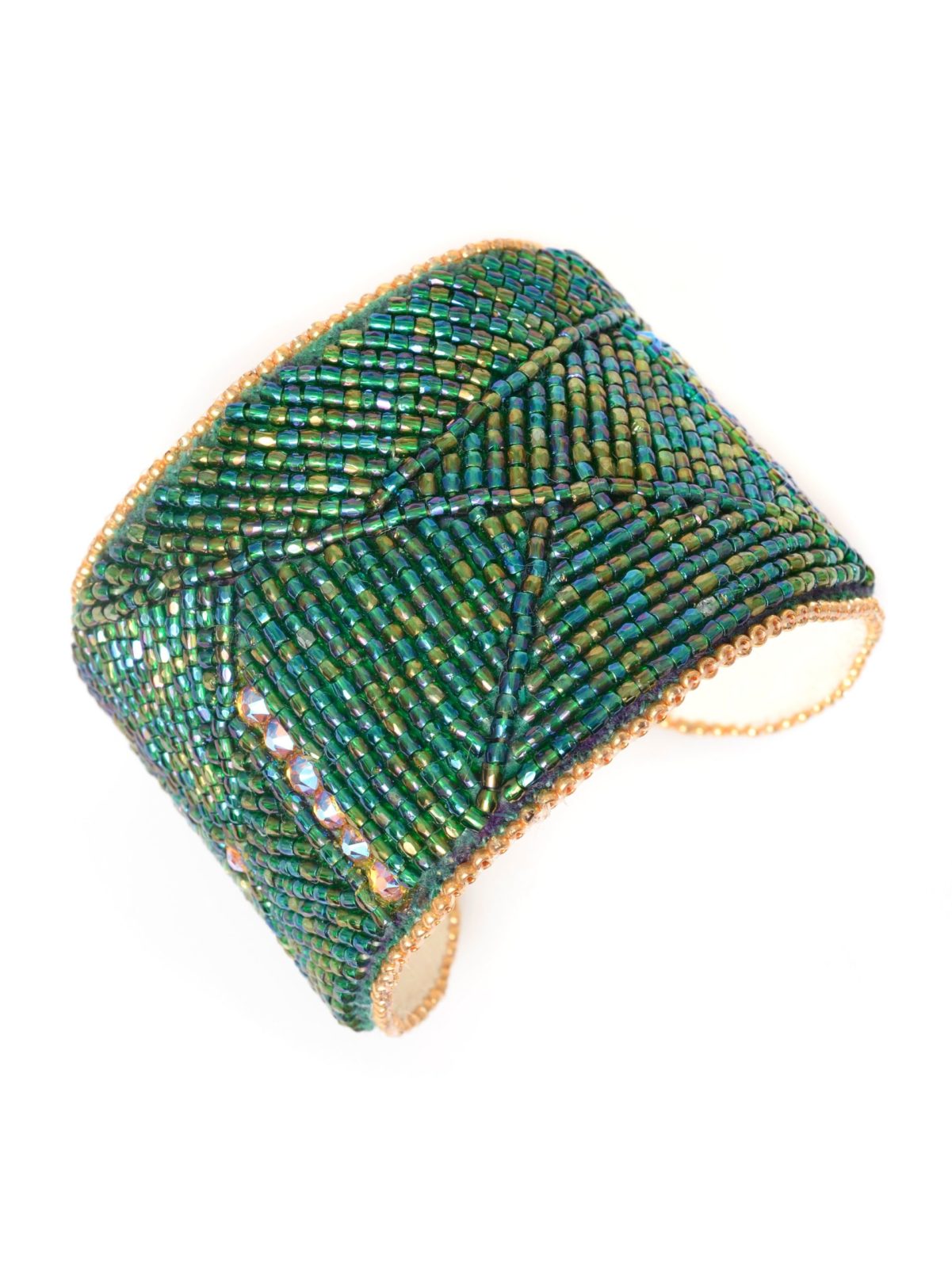 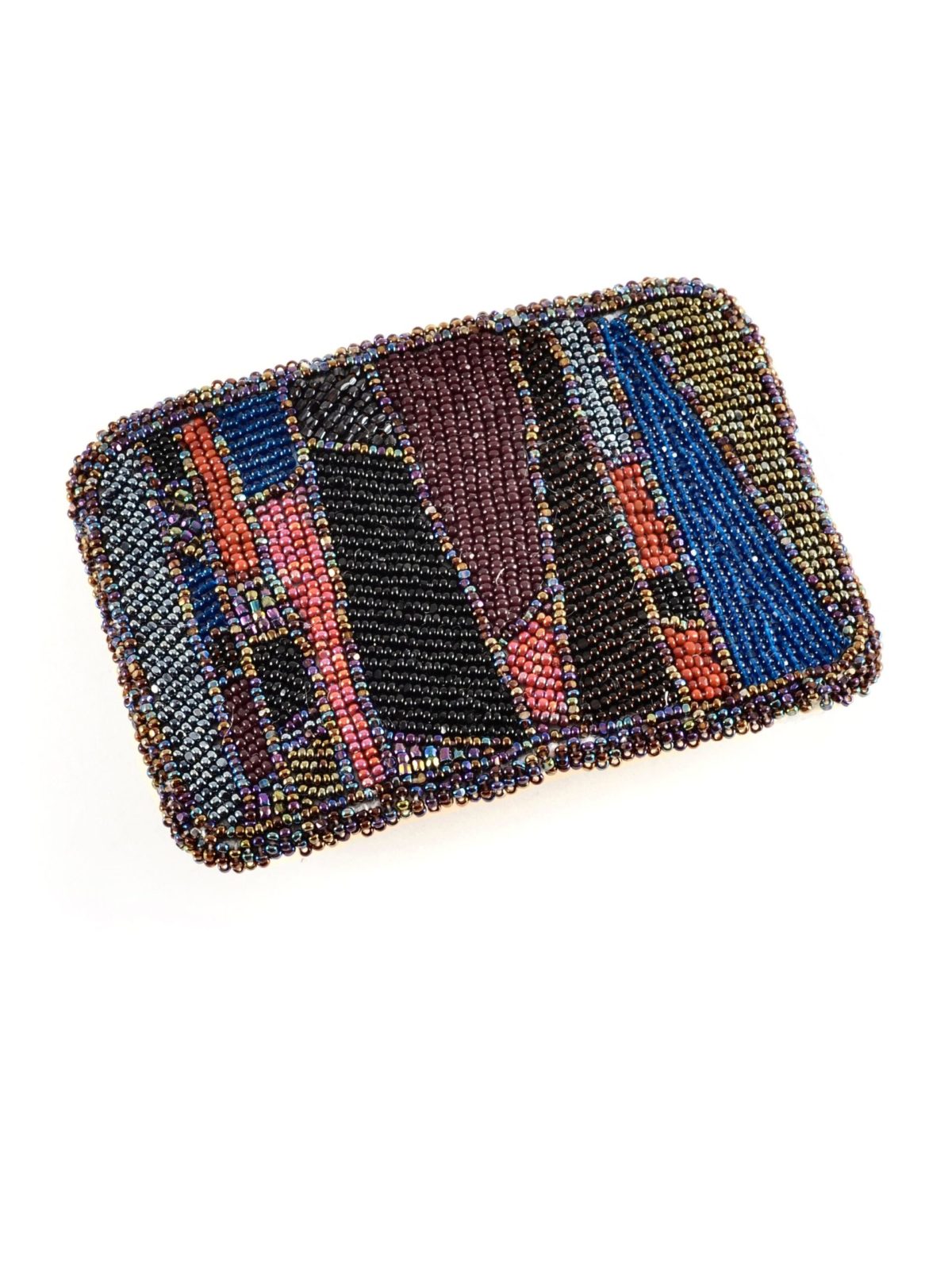 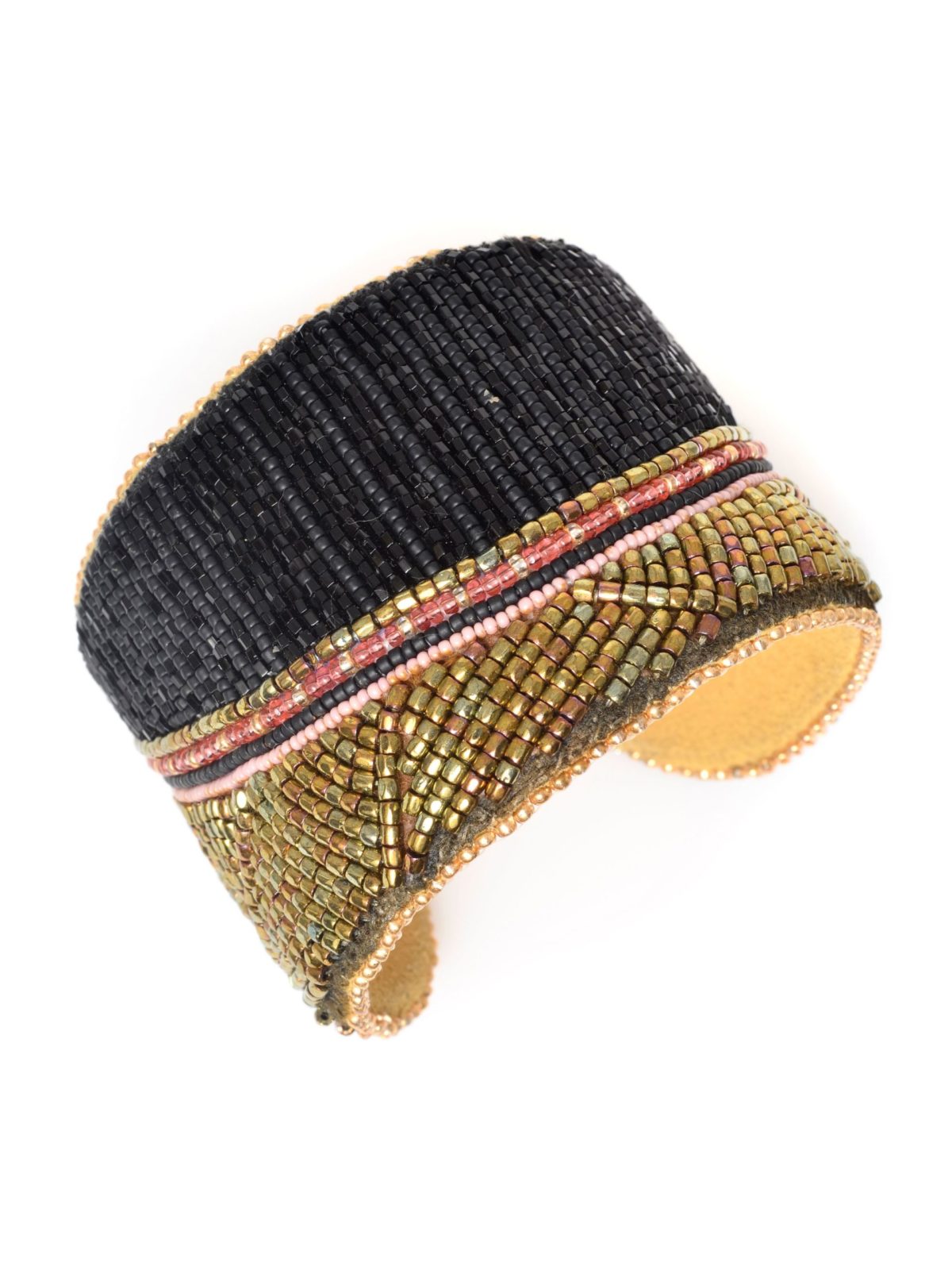 Yucca sandals have been created and utilized by indigenous people for thousands of years. In this two-day workshop, you will be introduced to the work of artist and culture bearer Stan Rodriguez as you learn to weave your own yucca sandals.

Stan will bring and share yucca branches that you will strip and clean in preparation to make cordage. You will learn ways to prepare yucca, including boiling and then finely twisting the fibers to create cordage. You will then weave your own pair of fully functional Kumeyaay yucca sandals. Stan will also share appropriate collecting and harvesting protocols that honor and respect the environment.

Stan Rodriguez (Santa Ysabel Band of the Iipay Nation) is an educator, language teacher, and tribal singer. He is an advocate for his community’s culture and traditions and serves in a number of advising and teaching roles in the San Diego and Kumeyaay communities. He holds the elected position of legislator for the Santa Ysabel Tribe of the Iipay Nation. A graduate of the Advocates for Indigenous California Language Survival immersion program, he teaches Kumeyaay language classes at Kumeyaay Community College on the Sycuan Reservation. He has taught workshops extensively at the Northwest Indian Language Institute and has been supported by the Alliance for California Traditional Arts in his efforts to learn and teach about Kumeyaay way of life and art.

Indigenous communities in Southern California have always created baskets to utilize for day to day tasks such as collecting, processing and storing food. The baskets produced are of great diversity and beauty, and the exquisite work of the Cahuilla is highly regarded. Over the last three decades, the Cahuilla have experienced a revival in the art of basket-making. Join weaver Rose Ann Hamilton (Cahuilla) and learn how to create your own Cahuilla-style coiled basket using yucca, juncus and deer grass. On the second day of class, you will take a field trip to the nearby Cahuilla Reservation, where you will learn how to identify, gather and prepare plants used in basketmaking. 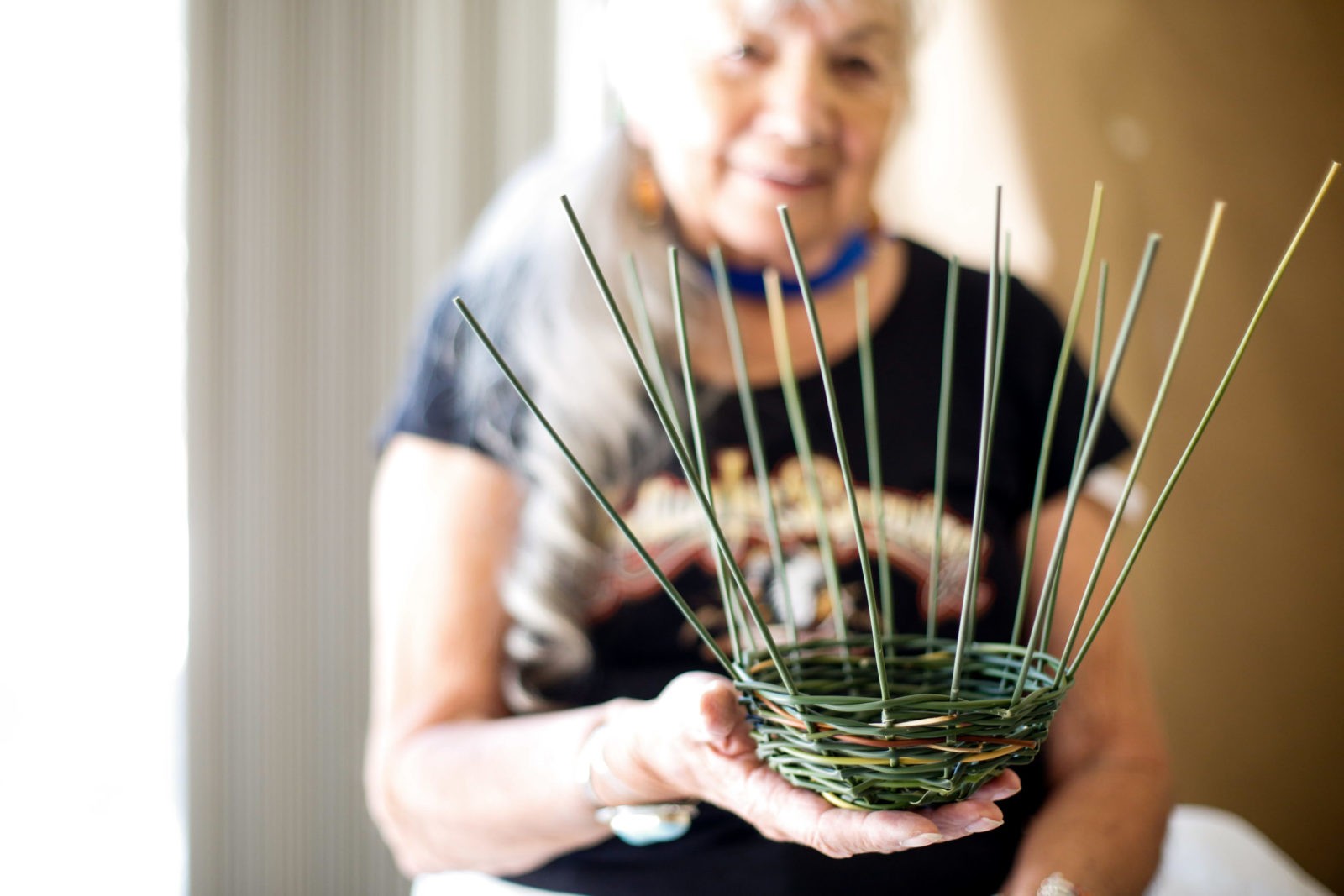 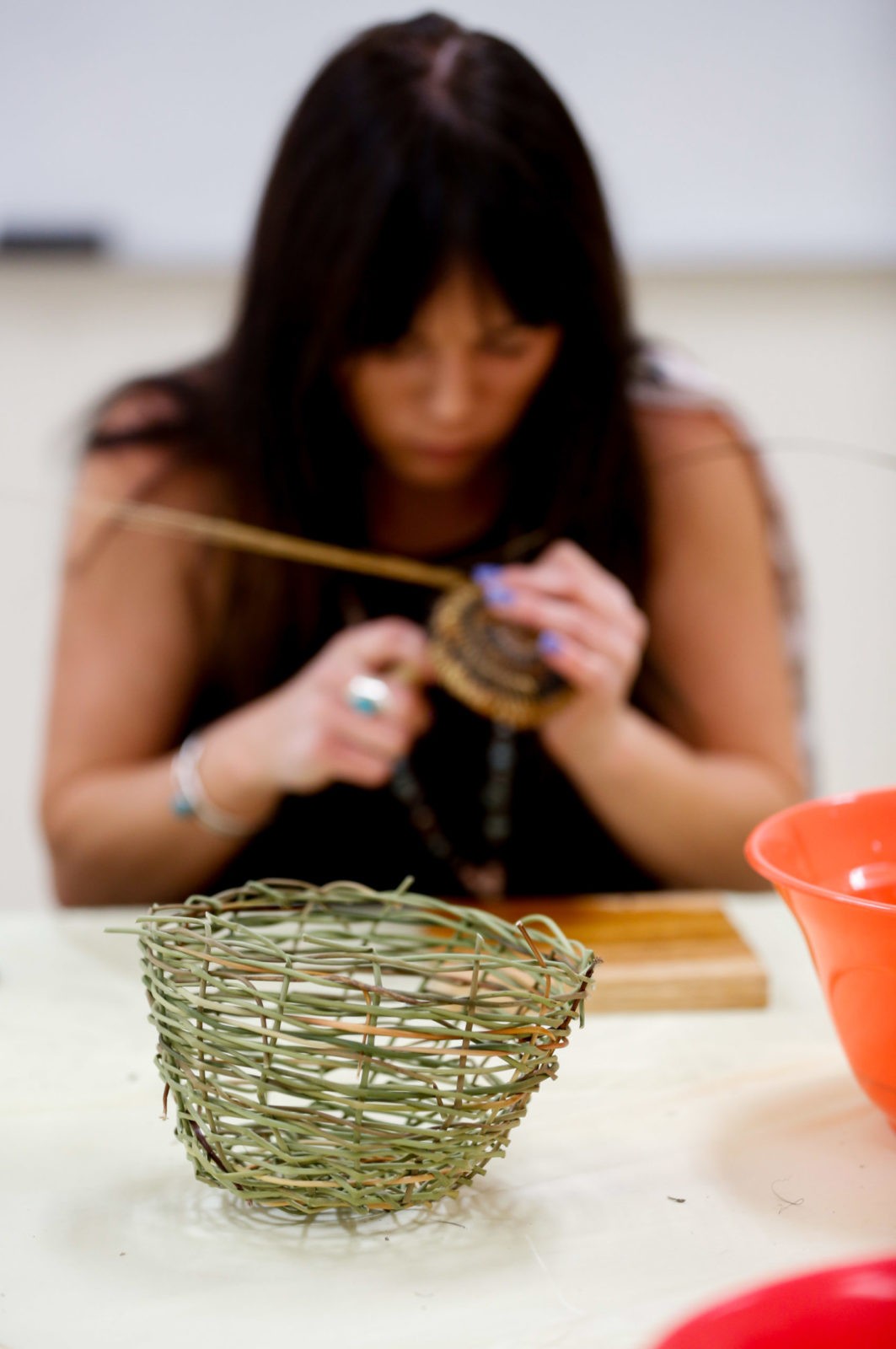 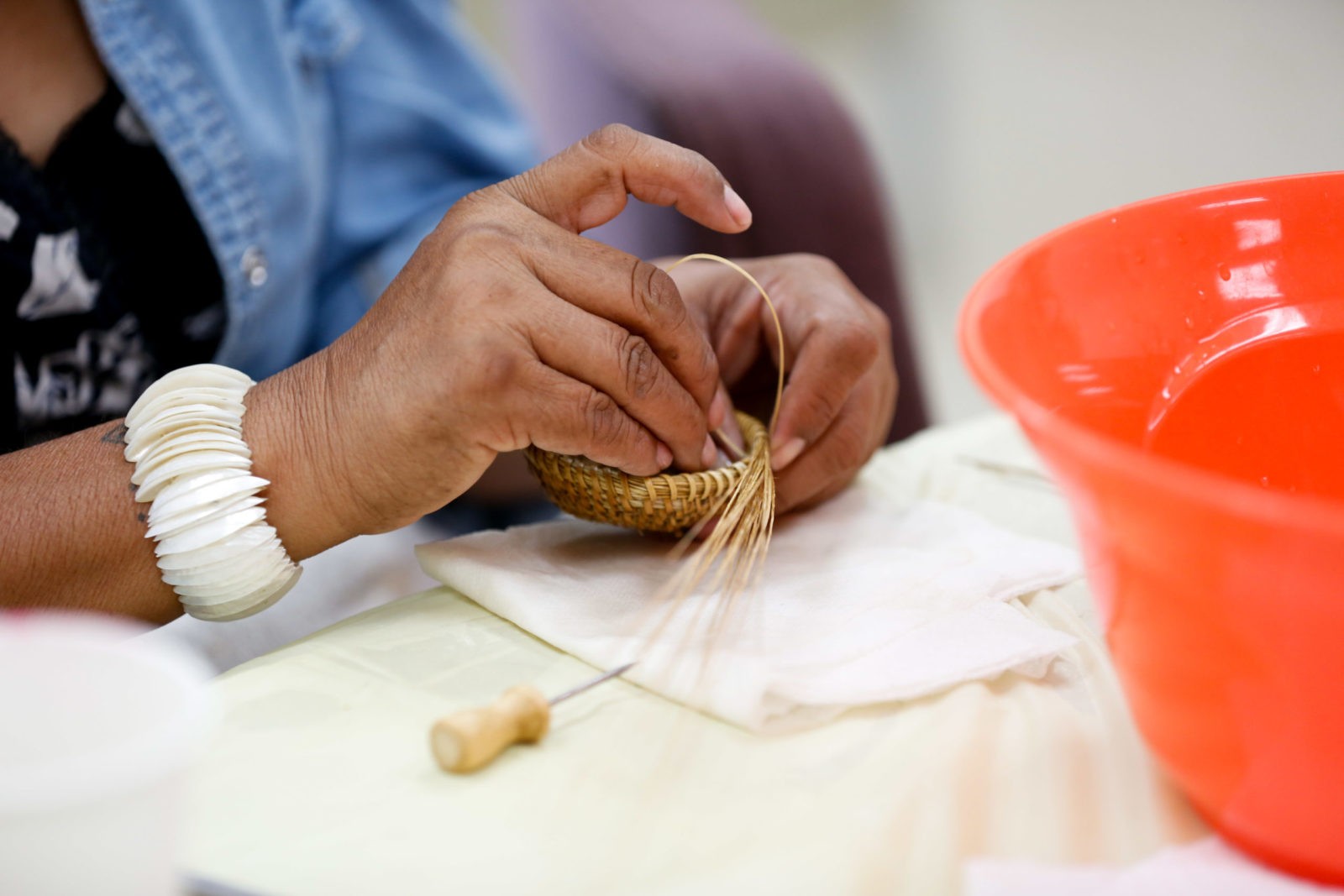 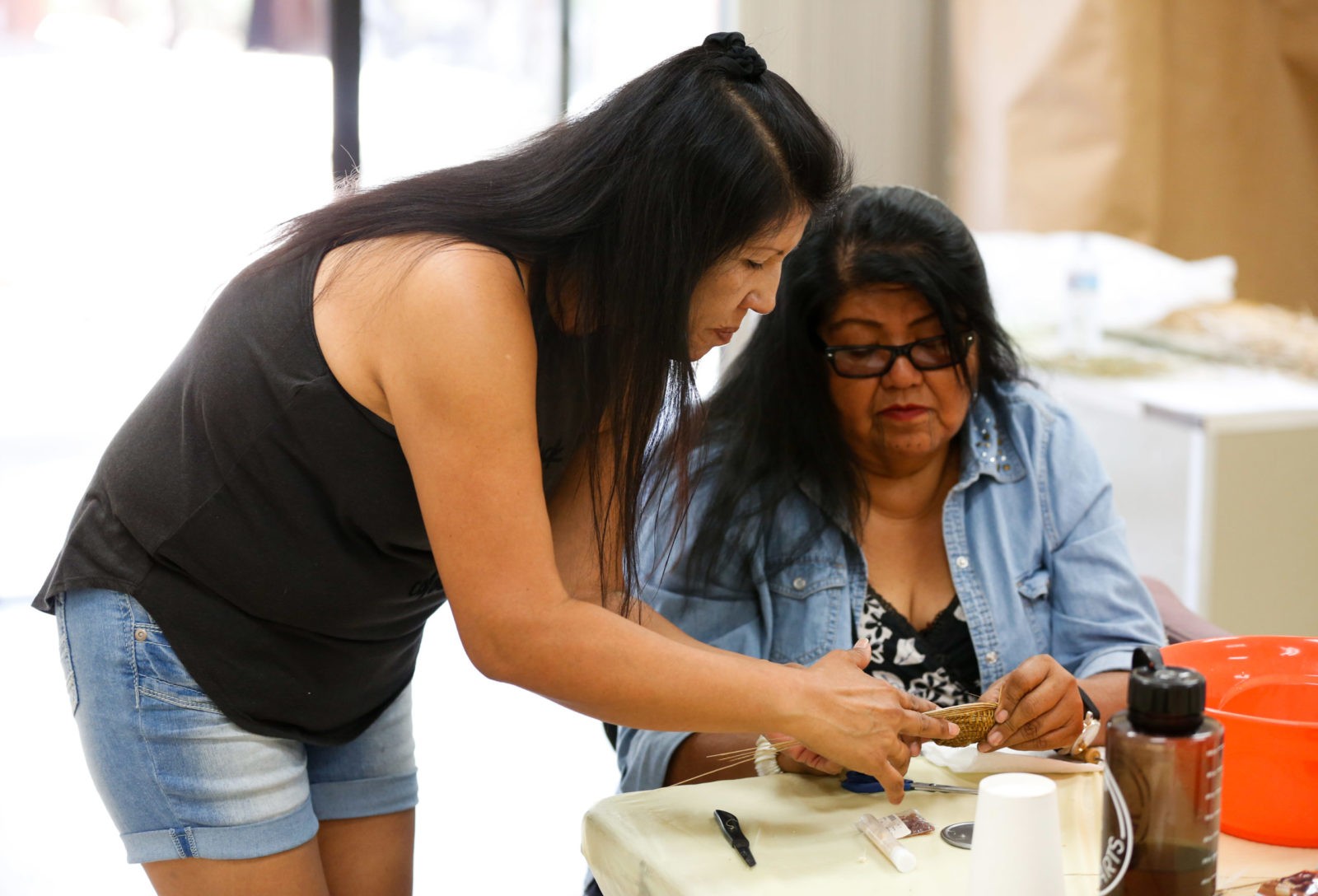 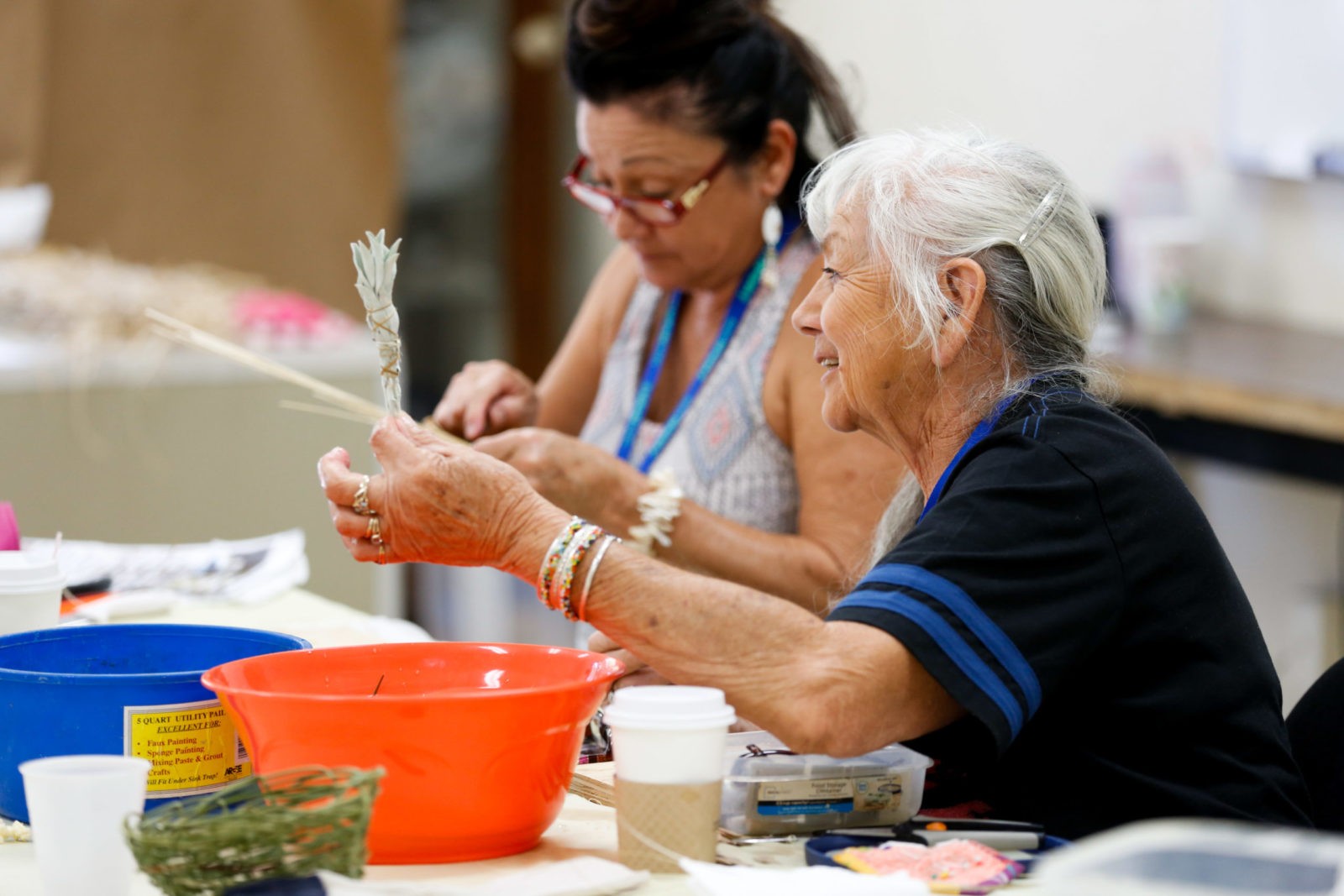