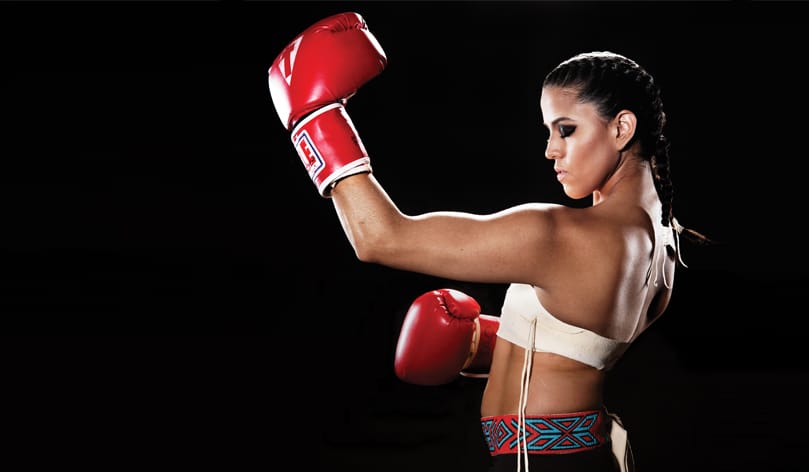 Cara Romero had managed to be on time for the Zoom meeting even though she needed to hunt for the best WiFi spot. When the Chemehuevi photographer whose “complex and nuanced images combine traditional iconography with a contemporary perspective” came into focus, she was seated in an indoor space flooded with natural light.

“This house that we moved into last night is about twelve feet from the sand of Hermosa Beach, and we can see the water from the house,” she said. “That we get to stay here for three months is like a dream vacation. Even though I won’t be on vacation!”

Romero was speaking on Zoom a few weeks after her Idyllwild Arts webinar on “The Indigenous Global Citizen Artist.” The youngest of her three children—they’re seventeen, fourteen, and eight—could be heard out of range of the Zoom camera. The next day would be his mother’s birthday, so the little boy wanted to know if there was a plan. Romero gently reassured him that there was indeed a plan.

The juxtaposition, in Romero’s photography, of traditional iconography with a contemporary perspective may seem radical. But it’s less radical than the juxtaposition of her family’s life “like a dream vacation” on Hermosa Beach with her reason to base her work there for three months.

“The erasure of Native American history in California has been particularly brutal,” she says. “Up and down the California coast, there are eighteen tribes whose treaties with the United States were never ratified by the Senate.”

It was a recipe for producing invisibility that Romero, with her gift for dramatic images, is determined to reverse.

“Most Californians do not know this history,” she says, “so we’ve moved here from our house in the Santa Fe suburbs for three months so that I can remind them of it.”

While in Hermosa Beach with her children and her husband, the Cochiti Pueblo artist Diego Romero, Cara Romero will illustrate the suppressed history of Southern California’s Indians with the help of financing from a $50,000 Radical Imagination Grant from NDN Collective.

“I’ll start with the Tongva/Chumash lands.”

“But eventually I’ll take in much more of inter-tribal California.”

Crucially, the story she wants to tell is about more than a vanished past. Romero’s statement that “Standing Rock is everywhere” declares solidarity with resistance to the Dakota Access Pipeline in Standing Rock, North Dakota. Her statement therefore implies that the recovery of Native American ways of life is forward-looking.

“The Native American way of life is about protecting all life,” she says. “The planet will require Indigenous leadership to come through the climate crisis. Surviving it is going to require an appreciation of Indigenous science.”

Romero grew up mainly in Houston with her white mother and Chemehuevi father. She began to discover the possibility of telling her powerful stories—and making her important arguments—as a senior at the University of Houston. As a Cultural Anthropology major, she took an elective in Photography.

“I fell in love with photography immediately,” she recalls. “Partly because I had one of those wonderful, life-changing professors who recognized that even though I was far behind the other students in technique, I had a gift for content. Photography is a highly technical medium, but he saw that with the camera I was able to sing.”

Her early photographs were black-and-whites of friends and family.

“As an artist, you should probably start by making art about what you know.”

Though she began by photographing in black and white, she believes her greatest strength may lie in her facility with color. She started to make more use of color as the range of her subject matter grew.

How Identity Can Heal

Making art about what she knew took on a larger meaning with Romero’s move to the Institute of American Indian Arts, in Santa Fe. Her understanding of what that move meant poses a challenge to anyone who might be tempted to pigeonhole her on the basis of her studies at IAIA.

“I consider my art bicultural despite its inevitable slotting. I’m mixed-race, and my work reflects my identity. For me, it’s impossible to imagine an absolute, unbridgeable separation between Indigenous and non-Indigenous culture. To be who I am is healing.”

Her last statement may seem puzzling until one reflects on the horrific injuries that have resulted from the failure to find bridges between Indigenous and non-Indigenous culture. Those injuries need healing. Imagining an absolute separation gave us the genocide of Native Americans.

But imagining such a separation has also given us the climate crisis. The latter has been precipitated by a conviction that taking only so much from nature and respectfully husbanding natural resources were consistent merely with “primitive” ways of life. We recognize now—too late, the pessimists would say—that the Native American ways of life long dismissed as primitive have been mistakenly undervalued. Those ways held the knowledge that has given us the scientific catch words of today: sustainability, regeneration, green, biomimicry, etc.

The Native American experience of the world also gives Romero’s art its distinctive style. She compares her photographic creations to those of the magical realists, in literature.

“My work is informed by the Indigenous worldview that the magical pervades everyday life. Yes, I think I have a natural talent for color. But I also use Photoshop—nothing natural about that!—to manipulate negatives. I try to present an alternate reality that can shock people.”

We surely live in a time that demands alternate realities. The reality of the climate crisis and of the centrifugal forces exerting outward pressure on different peoples, driving them away from a common center and apart from one another, is unsustainable. To the extent that artists like Cara Romero can persuade us of the plausibility of alternatives, art will achieve the positive transformation of lives.

Dear Idyllwild Arts Community, As I write to you, students are preparing to leave for…