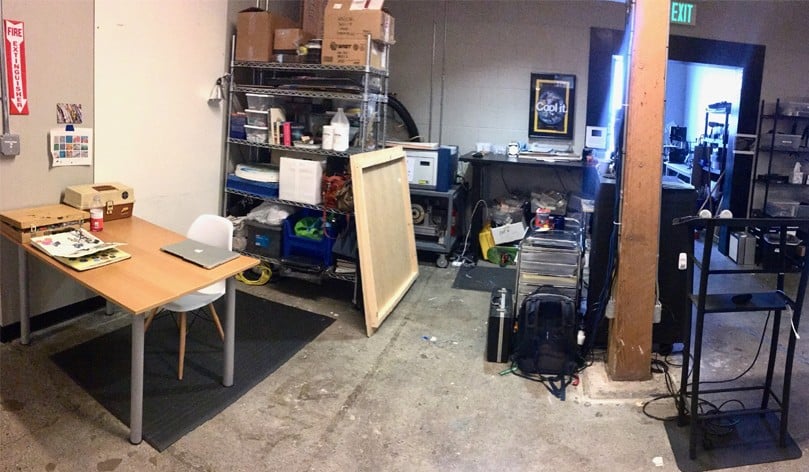 My artwork “Linked” installed next to a Skybox satellite! Photo Credit: Forest Stearns

With only a few days to collect and repack my suitcase — switching out my hiking boots with my suit jacket — I load my car for the next leg of my back-to-back residency tour to Planet’s headquarters, known as the Mothership. Driving past clusters of cattle and wind turbines for 6 hours, I pull up to a dark grey building in downtown San Francisco, for my first meeting — a conversation with Planet’s Creative Exchange. I am welcomed by Forest Stearns, Director of Planet’s Art Residency program and Chief Space Artist, and Andrew Zolli, renowned author and V.P. of Planet’s Global Impact Initiatives, with hugs and cheery introductions. This new studio is oddly familiar as my artwork colors the walls in the main hall and conference room.

A group of 10 invited guests circle up with snacks and drinks galore. This group is comprised of top-notch curators, artists (including Planet’s AiR alumni), writers, residency facilitators, typographers, and community leaders. Our overlapping interests in art and science, community engagement, residency program models, and collaboration across disciplines unites us. We deliberate how to build reciprocal relationships between artists, designers, nonprofit leaders, start-ups, research labs, corporations, residencies, and beyond. The meeting concludes with a question: what question are you interested in asking to inform what you make?

“Artists and scientists tend to approach problems with a similar open-mindedness and inquisitiveness — they both do not fear the unknown, preferring leaps to incremental steps.” – John Maeda, Scientific American

The following days are busy and overwhelming, yet perfect. I tour Planet’s downtown offices and facilities in Mountain View, meeting at least 20 people a day and watching talks by guest speakers. A typical day includes ordering art supplies, brainstorming projects, researching topics introduced by engineers, and exploring Planet’s software as I travel around the world (digitally) as a Planet Ambassador. Activities like grabbing lunch with the Mission Control team, sitting in on a meeting about the upcoming eclipse, and having an afternoon chat with an astronaut is a normal day. On Friday, I visited NASA Ames with fellow Planeteers. We toured the anti-gravity simulator, giant wind tunnels, “McMoons” lunar gallery, and a digital excursion on the surface of Mars. MarsTrek, an open source tool for exploring Mars, was the highlight from my trip. We learned to identify polyhydrated sulfate deposits on Mars to detect where water is stored. We examined giant outflow channels from 3.5 billion years ago to track a major northern ocean where surface water is currently flowing just centimeters underground. We found active debris covered glaciers that serve as atmospheric time capsules, storing the history of Mars in core samples. This is a pinnacle discovery— wherever we find water, we find life! Whether viewing the gloppy patterns of the lunar surface or traversing canyons and mountains on Mars, the visual sites of this tour were astounding. It serves as proof that the artist and scientist look up to the stars pondering the same question— what is out there? Stay tuned to see what I make in response to these experiences…