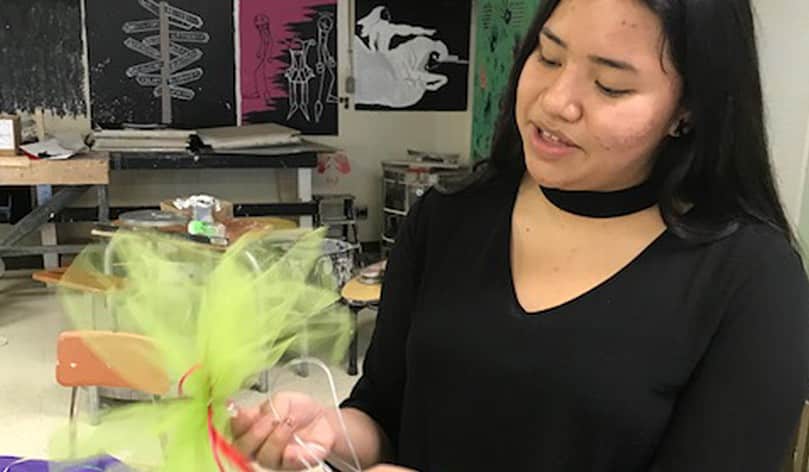 Abbie didn’t know Pine Ridge or the students or her collaborating teachers—and she would have only a few days to organize the Thursday, Oct. 25 performance.

“But everyone’s been so welcoming,” Abbie told Idyllwild Arts Assistant Head of School Marianne Kent-Stoll at noon on Monday, Oct. 22, halfway through her first day of organizing. 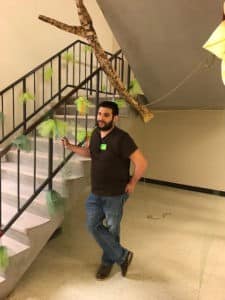 Charles Her Many Horses ponders the “Midsummer” set.

Marianne had first come to the Pine Ridge Reservation in 2017, to see a friend whose husband, a Pennsylvania biology professor, was using his sabbatical to teach at Oglala Lakota College. The strong Idyllwild Arts connection to Native Americans had been focused on the Southwest, so the chance to build a relationship with a Great Plains tribe was exciting.

Part of Abbie’s warm welcome radiated from the perpetual smile of Lakota artist Charles Her Many Horses. Charles is helping with costume and set design for the performance, staged in the school’s halls and beneath a stairwell.

“My great-great-great-grandmother was very beautiful, so she had lots of suitors,” he said when asked about his name. “She’d say, ‘I probably won’t marry you, but I’ll consider it if you give me some horses.’ She never married, but her herd of horses extended for a mile when roaming across the prairie.”

The devised play is in English, though Red Cloud includes Lakota immersion for the youngest elementary school students, plus Lakota in its college-prep high school.

“They’re all Lakota,” says high school Lakota teacher Roger White Eyes. “But many kids that I introduce Lakota to have been raised by fluent Lakota speakers. Family memories of being shamed for speaking their own language were traumatic, and a lot of parents didn’t want the trauma for their children.”

English had once been forced upon the Lakota and other Native Americans. When many preferred their own language, speaking English was a punishment or a nightmare. The Lakota children that Abbie and Charles Her Many Horses are working with on their Shakespeare adaptation are speaking the English of a magical dream.