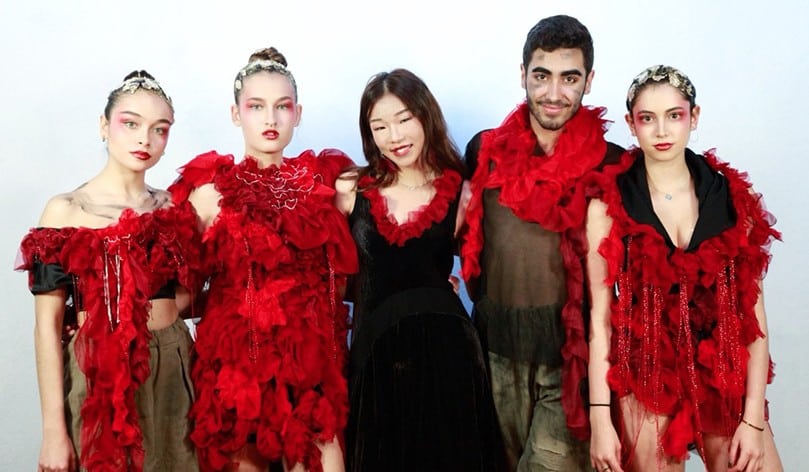 Pictured above: Ruoqi Zeng with models.

When Idyllwild Arts Academy established the first high school Fashion Design Concentration in the U.S. in 2010, the Chairs of its existing arts departments didn’t count on large numbers of students to come from China.

What the Academy hadn’t counted on was young Chinese fashion lovers like Ruoqi Zeng casting a wide net across all of China for a fashion school and coming up empty.

“There are a large number of Chinese interested in fashion,” the Idyllwild Arts twelfth-grader said via Skype from her home in Shenzhen, ten miles north of Hong Kong.

Ruoqi is less than a day removed from the flight that had taken her home after the end of the Academy’s fall semester, but she says she isn’t tired. Not the least of the virtues extolled by Ruoqi’s teachers is her energy.

“There are more Chinese reading fashion magazines and going to fashion shows,” she says. “But I didn’t find any official fashion design high schools in China, where the standards are really high and you would be graded.”

Guo Pei proves—as if proof were needed—that there’s nothing inherent to Chinese culture that would block original creations in fashion design or any other art form.

However, the hunger for foreign investment that helped fuel the establishment of SEZ’s has gnawed at a people for whom Mao Zedong’s Great Proletarian Cultural Revolution and frontal assault on Western decadence ended only four years before Shenzhen became the first SEZ. For a full decade the fashion instincts of the Chinese had been suffocated beneath a sea of grass-green army uniforms and Mao suits.

But Ruoqi belongs to a generation of Chinese that she says want “new ideas and new thinking” and is “more open-minded.” 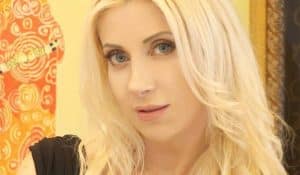 Idyllwild Arts Fashion Design teacher Evelina Poghosyan is perfect for an art form in which new ideas and thinking and open-minded innovation are prized. And she may be better than perfect for the Academy’s Chinese Fashion Design students like Ruoqi, since Evelina’s own country has also undergone radical transition during her lifetime.

Evelina was nine years old and her native Armenia belonged to the Soviet Union when she fell in love with fashion. The 1991 scattering of the Soviet Union’s “Socialist Republics” like Armenia into independent nations led to the scattering of many individual former Soviet citizens. These included Evelina, who wound up in Los Angeles at Otis College of Art and Design.

Southern California’s weather suited her aesthetic and she went on to license the name of celebrated former supermodel Peggy Moffitt for a successful active-wear line.

Evelina’s fashion business background is exactly what Ruoqi wants—although Ruoqi’s “determination, passion, self-motivation, and willingness both to take direction and to lead” also make her the “dream student” that Evelina wants

Ruoqi is “goal-oriented,” Evelina adds, “but obsessed not only with her own success, but with the success of her team. She’s always happy to roll up her sleeves to helps others.”

Why is Ruoqi more interested in fashion business than in design? After all, she’s created plenty of eye-catching pieces for the Idyllwild Arts fashion shows.

“Of course I like design, but designing is isolating and I like interacting with people. So fashion business is more suited to my personality.”

This includes among other things, Ruoqi says, lessons in “how to brand, what culture you want to give your brand, how to attract customers, how to do consumer research to identify the customers you want. . .”

“Not trying to sell miniskirts to older women is obvious. But I promise that fashion business is more complicated than that.”

Whatever complications the study of fashion business may involve, the assessments of Ruoqi by Evelina and her other teachers make it clear that she’s ready for them, at Idyllwild Arts and either Parsons School of Design or the Fashion Institute of Technology—her likeliest destinations for college—as well as beyond.