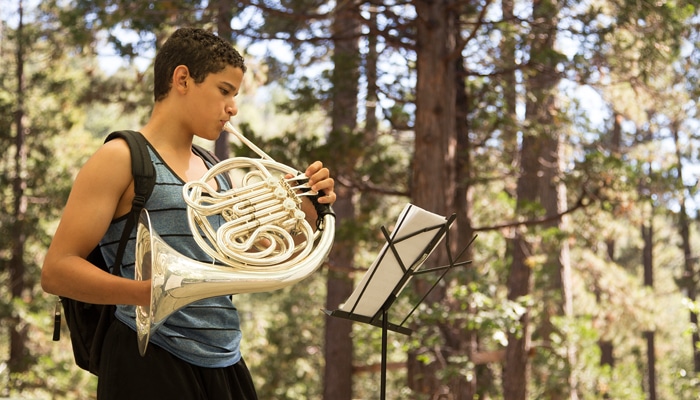 The Idyllwild Arts Chamber Festival Intensive provides a unique opportunity to develop and refine the skills needed to excel both as a chamber musician and in an orchestral setting.

Students will spend their days rehearsing masterpieces from the chamber repertoire under the instruction of renowned chamber music specialists, participating in masterclasses, and pushing their musical limits – all in the breathtaking mountain setting of Idyllwild. Rather than treating chamber and orchestral music as unrelated art forms, Chamber Festival recognizes the importance of developing a complete skillset, and giving the festival participants the tools they need to excel as 21st century artists. The schedule is designed to foster an experimental, collaborative environment for the students, with a mix of chamber coachings, rehearsals, masterclasses, and individual instruction. 2021 Summer Program faculty teach at leading conservatories such as  The Juilliard School, Manhattan School of Music, The Colburn School, USC and comparable institutions around the globe. They  can be heard performing in world renowned ensembles such as  the New York Philharmonic, Los Angeles Philharmonic, Vancouver Symphony, and the Seattle Symphony.

A recorded audition is required for acceptance. After being successfully accepted into the program, students will then audition for chair or ensemble placement on the first day of the program.

Chamber Festival is aimed at ambitious and aspirational musicians who are considering careers in music, and as such, admission is selective. The priority audition deadline is February 25th, but applicants are encouraged to register and audition as early as possible. Please submit your application and audition as soon as possible to secure your seat.

Students who participated in the Chamber Music Intensive, Symphony Orchestra Intensive, Chamber Festival Intensive, or Piano Performance Intensive are pre-qualified for any of those programs in the current year if they are playing the same instrument. These students are not required to audition again. Applications will remain in Applied status until staff can review and approve the enrollment.

After you have completed your online application, find and complete the forms listed below on the Forms & Documents page of your CampInTouch account. Acceptance for most auditioned intensives will be made on a rolling basis, so it’s a good idea to get auditions in early.

** Detailed instructions for uploading PDF documents are available on your CampInTouch account.

If you have any questions, we would be happy to help! Contact the Summer Registration Office by email at summer@idyllwildarts.org or by phone at (951) 468-7265.

Concert clothing is CONCERT BLACK. Students can mix and match from this list as desired:

American conductor Gregory Robbins enjoys a diverse career as a performer, educator, bassist, and arts advocate. He has held positions as Associate Conductor of the Greater Bridgeport Symphony (2014-16), Music Director of the Delphi Chamber Orchestra (2011-2018), and Director of the Young Artists Philharmonic (2013-2019), a regional Youth Orchestra based in Greenwich, CT. A strong advocate for music education, Robbins has extensive experience working with a variety of Youth, Secondary, and Collegiate ensembles. He has made conducting debuts at Yale School of Music, NYU, and lectured at Mannes College: The New School for Music.

Robbins is active in the worlds of Jazz and Popular Music, recently conducting the debut album of the Assembly of Shadows Jazz Orchestra, and premiering Miho Hazama’s “Jazz Mass” at St. Peter’s church in New York City. In 2018, he led a performance at Brooklyn Academy of Music featuring John Cale (formerly of Velvet Underground) and the Wordless Music Orchestra which gained wide acclaim from The New York Times, Rolling Stone, and The New Yorker. In 2018 he also led the Video Game Orchestra in a sold out concert at Anime Boston. In the world of film and tv, he was the “conducting coach” for Gael Garcia Bernal, star of Amazon’s hit Mozart in the Jungle series.

As a chamber musician, Robbins has performed with such luminaries as David Frankl, Clive Greensmith, and Ani Kavafian, among others. He has also collaborated with members of the Tokyo, Linden, and Attacca string quartets for concerts at Carnegie Hall and the Norfolk Chamber Music Festival. He received his formal training at Yale School of Music and Manhattan School of Music, and currently resides in Idyllwild.

The full list of faculty will be available in early January 2021.

No Honor Awards are available after April 15. Additional financial aid based on financial need is available.

Instrument Breakdown / # of Slots per Instrument

The instrument breakdown listed above is a projection of the intended enrollment for the program – actual final enrollment may vary slightly from this at the conductor’s discretion.

*This instrument has sold out. To join the waitlist, please complete the Camper Application for all ages. Here is a guide to joining the waitlist. You will receive an automated email that your child is in Applied status after submitting the application. Once we have reviewed your application, we will follow up with an email confirming that you have been added to the waitlist.

Performance information to be announced.