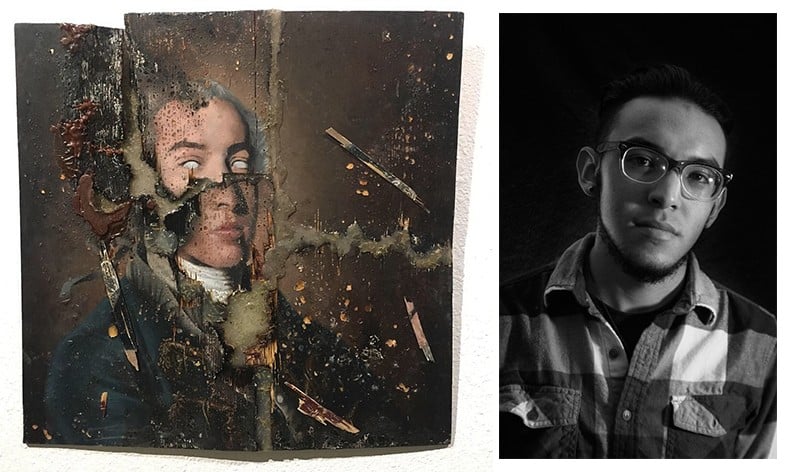 The painting that substitutes Greg Ballenger’s own features for those of the German philosopher Immanuel Kant (1724-1804) tells much of the story for the 2014 Idyllwild Arts Academy graduate. If the eyes are the window to the soul, what soul do the blank eyes in Greg’s painting reflect?

Their blankness may imply blindness to the experiences and concerns of non-Western peoples. Or the eyes may not be blind but simply rolled backward and peering within, locked into a self-absorption that can’t be bothered to look outside the West.

In either case the blank eyes repel the gaze and leave the soul behind them in mystery. The mystery arises from the unresolved dialogue between the two worlds that Greg inhabits as a descendant of the Diné (Navajo) people as well as of Europeans. Much of his art examines the often fraught relationship between these two worlds through use of traditional materials or through the repurposing of classic Western images like the portrait of a magisterial philosopher.

In dialogue, one side has to keep silent while the other speaks. Last spring, during his junior year at the Institute of American Indian Arts (IAIA), in Santa Fe, Greg’s Western side kept silent long enough for his Indigenous side to convince him temporarily to set aside painting and pursue sustainable Indigenous architecture.

That decision has been motivated not only by the increasingly global concern about climate change, but by his own Indigenous perspective on the need for environmental preservation.

“Indigenous people aren’t responsible for climate change,” he points out, “yet they’re the most affected by its repercussions.”

That perspective is intimately familial in Greg’s case, since decades ago “my grandmother was already noticing fewer insects every year.”

The climate-change crisis demands imaginative responses of the kind that Greg is well equipped to make. At IAIA he has interned as a painter and sculptor with Walt Disney Imagineering, studied for a month in Venice, interned with a trompe l’oeil muralist, and exhibited his work in front of tribal leaders and United States Senators. He’ll take part this spring in a group show in England, in Bristol, and he’s lined up for a residency in Genoa in March of next year.

Throughout his time at IAIA, as during his two years at Idyllwild Arts, the dialogue between his Indigenous and Western side has spoken eloquently. Additional energy may be fed into that creative dialogue if Greg goes on from IAIA to the Yale School of Art.

“Yale may not have the language for Indigenous arts and perspectives,” he cautions. “So it could be extremely challenging for me as a Native American.”

The transition from the Institute of American Indian Arts would be dramatic and possibly disheartening.

“On the other hand”—there’s excitement in his voice—”the challenge may be good for me!”

Jazz Master Plays Well With Others

Pictured above: Marshall Hawkins and Maasai friends. As he looked ahead to performing at the…