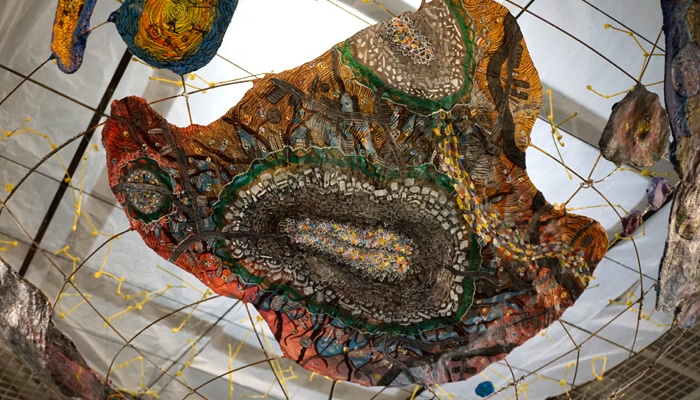 The premature closing of the Idyllwild Arts campus in March, because of the pandemic, pushed the rest of the Academy’s 2019-2020 school year online and forced cancelation of performances and exhibits that students had spent months preparing for. The young artists started returning to campus on October 1, for classes that remain mostly online but have often taken advantage of the school’s beautiful outdoor spaces. They brought their memories of last spring’s disappointment with them.

“They weren’t able to read from the Parallax literary magazine that they’d put so much work into producing,” explains Henderson, Chair of the Creative Writing Department. “Knowing that their friends in the other arts disciplines had experienced the same thing, they came up with the idea for a multidisciplinary show. It was Bella Koschalk, one of my eleventh-graders, who suggested calling it the ‘Lost Works’ performance.”

Recruiting performers and exhibitors from other arts departments was easy. Henderson says her online teaching now “feels more natural than it did last spring,” when the Academy faculty needed to adjust to Zoom classes almost overnight. She adds that “discussions feel about the same” as they do during in-person classes. Yet satisfaction with an Idyllwild Arts education is incomplete without the chance to show the art that the classwork prepares the students to make.

Fashion Design students show some of their creations and the Film & Digital Media Department offers a compilation of the best pieces produced by last May’s graduating seniors. Not to be left out, the Visual Arts Department is represented by work from a Senior Show, Lantana, that the pandemic short-circuited. Ariel Barish, Raegan Ingbretsen, Aleca Lee, Lily Nam, Han Sung, and Jeremy Xu were the graduating seniors showcased in Lantana.

The show is called “Lost Works” for good reason, yet there would be equal justice in calling it “Found Works.” If you join the students of Idyllwild Arts for this virtual show, you’ll have found young artists whom the pandemic has slowed down, but failed to defeat.

Dear Idyllwild Arts Family, Businesses and schools across the country are now impacted by the…

Three Big Talents Among Many

Pictured above: Joe Davis with his father, Sheldon Idyllwild Arts Academy's Class of 2021, like…