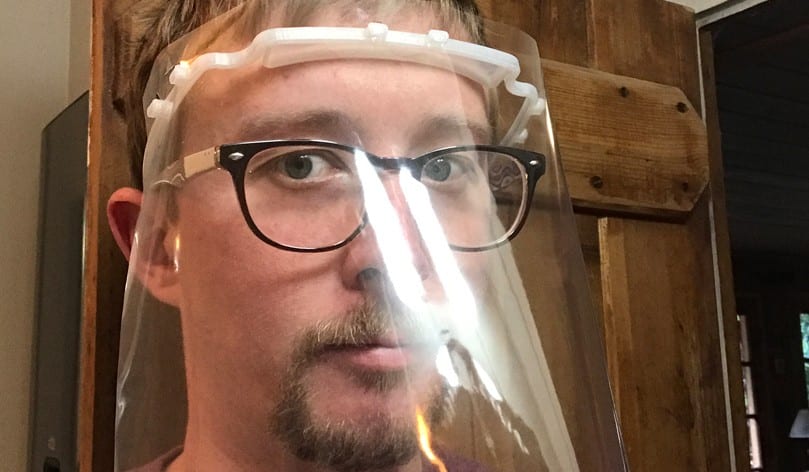 During California’s COVID-19 lockdown, Trevor Holmes has spent much of his time reading and catching up on TV shows, like a lot of people. And because he lives a mile above sea level in Idyllwild, where spring is still trying to decide if it wants to get out of bed, he’s been spending additional time mountain-biking and gathering firewood.

But the COVID-19 crisis has also prompted Trevor to apply his professional skills to the home manufacture of plastic face shields.

“About seven or eight dozen so far,” says the Idyllwild Arts Academy Theatre teacher. “But I’ll keep going. I already owned a 3D printer before, but I’ve bought another one to keep with demand.”

He sends the face shields to Los Angeles. There, Idyllwild Arts graduate and Hollywood costume designer Lauren Oppelt has launched the “Mask Crusaders” group whose roughly one hundred members have teamed up with the Costume Designers Guild (Local 892) to deliver protective masks to hospitals in states as far away as Rhode Island and Florida.

Trevor is in his seventh year as a full-time teacher of the technical—or backstage—aspects of Theatre at Idyllwild Arts, where he was a high school classmate of Oppelt until his 2005 graduation. He went on to California Institute of the Arts (CalArts), earning his Bachelor of Fine Arts degree in Design and Production, before returning to Idyllwild Arts. With his brother, Justin, also an Idyllwild Arts graduate, Trevor explains face shield-making in a video.

This year, he is teaching Introduction to Design, as well as Drafting. He was interviewed just before all of the Academy’s arts and academic classes, on pause during the three weeks of Spring Break, were about to resume with online instruction. As for most Idyllwild Arts teachers, online instruction would be new to him.

“Before COVID-19 came along I used my 3D printer for fun stuff,” he says. “That included making props if the Theatre Department staged a play that was set a few centuries ago, and we needed things you just couldn’t find anymore.”

For example, for last month’s performances of The Glorious William & Mary {A Tragic (But Mostly Comedic) Royal Love Story}, Trevor 3D-printed what was supposed to be the Sovereign Orb of William of Orange, King of England, Scotland, and Ireland (1689-1702).

“I based it on the Holy Hand Grenade of Antioch, from Monty Python and the Holy Grail, which the playwright, Kasidy Devlin, loved because he’s a big Monty Python guy. But it’s great to know that now my 3D printers are helping to save lives.”

Yes: great, important, valuable, even crucial. But Trevor is thinking what everybody else is thinking while the battle against the virus rages on.

“It’ll be even greater when we don’t have to live like this anymore and I can go back to the fun stuff.”

Success for a High School Writer

Pictures above: TV promo of the 2019 fundraiser Women of Jazz with one of them, vocalist…