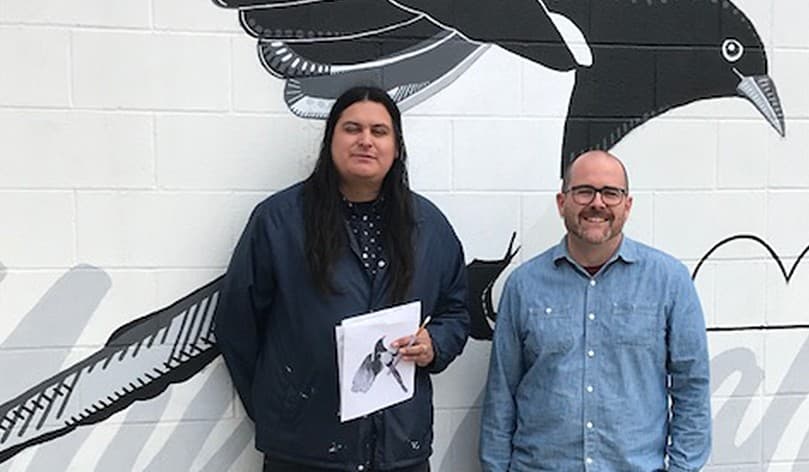 “Wakan Tanka—the Great Spirit—decided to end the world’s chaos by organizing a race whose winners would bring order.”

Peter Strong was explaining why he and his wife, Mary Bordeaux, had named their collective space for artists in Rapid City, South Dakota, the Racing Magpie.

“The pounding of the feet of all the animals on the circular racetrack caused it to sink into the earth, pushing up the ground inside the circle to form the Black Hills that are sacred to the Lakota. Many animals were trampled to death and their blood gave the ring that still encircles the Black Hills its distinctive reddish color.”

Peter had an attentive audience from Idyllwild Arts: Assistant Head of School Marianne Kent-Stoll and InterArts Chair Abbie Bosworth had traveled to the Pine Ridge Indian Reservation to build a relationship with the Great Plains tribe, the Oglala Lakota.

One outcome of the Pine Ridge visit by Marianne and Abbie was the purchase of original works by Lakota ledger artist Quinton Maldonado to add to the Idyllwild Arts permanent collection.

A more ephemeral result of the visit was Abbie’s Oct. 25 abbreviated A Midsummer Night’s Dream, at Red Cloud School, two hours from Rapid City on the reservation.

Michael Two Bulls is one of two creators of Racing Magpie’s new mural featuring the magpie. Michael had been scheduled to collaborate with Abbie on Midsummer. 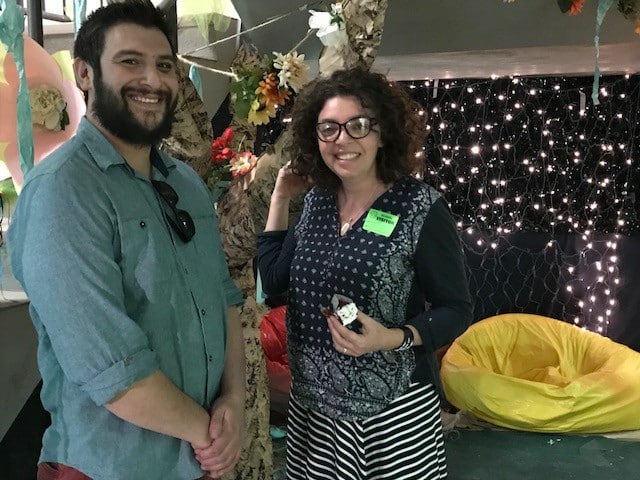 Charles Her Many Horses with Abbie.

But Michael was kept busy by his mural commission, so Abbie worked instead with Charles Her Many Horses. Though Abbie says Charles was “brilliant,” the unexpected collaboration was only one test of her adaptability.

“Red Cloud’s high school teaches Shakespeare every year, and the students were lovely,” Abbie says. “But this was an optional activity. Different children showed up each day, and the freshmen hadn’t had Shakespeare. We started rehearsing Monday for Thursday’s play, by which time I thought the cast was pretty set.”

“Twenty minutes before the performance, half the cast wasn’t there. But even with three brand-new actors, it came off well—thanks to Charley’s magical set design.”

An earlier hiccup had been an unorthodox interpretation of the play by the youngest cast member. The seven-year-old recruited to play the Changeling Boy insisted that he wanted to portray a fox instead.

“He’d had quite a convincing fox’s mask made,” Abbie shrugs. “I said he could turn into a fox at the very end of the play and scurry away. He was satisfied.”

If invited, would she return to Pine Ridge Reservation and Red Cloud?

And she’d be absolutely ready for more surprises.

Eighty percent of success is showing up. — Woody Allen Each residency presents its own opportunities,…