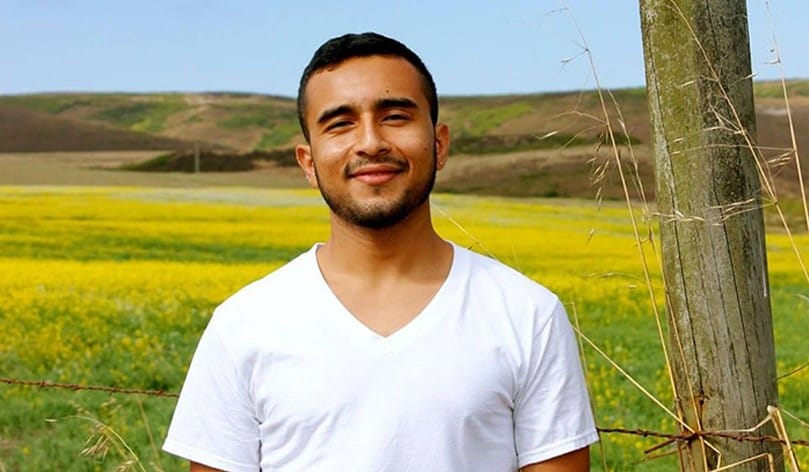 The nickname for the EB-1 visa that Javier Zamora requested gives a sense of the acclaim for the twenty-nine-year-old poet invited to the Idyllwild Arts Summer Program’s upcoming Writing, Poetry & Writers Week.

The EB-1 visa’s history goes back to Albert Einstein’s admission to the United States in December 1932. The next month Adolf Hitler would be named Chancellor of Germany—no place for Einstein’s “Jewish physics” (Jüdische Physik).

That history gives a sense of why, by last summer, for twenty years Zamora had been in the United States instead of his native El Salvador. As his biography explains, his parents’ migrations were originally caused “by the US-funded Salvadoran Civil War” of 1980 to 1992 (javierzamora.net/bio).

But pressure on undocumented immigrants had been rising, especially since the 2016 presidential election. To apply for the EB-1 visa and its corollary path to citizenship, Zamora needed to make an eye-opening journey home to El Salvador.

“I didn’t remember my country being that dangerous,” he admits. “Rural areas like where my grandparents live”—the coastal town of La Herradura—”seem to be more dangerous. People’s schedules have changed. They lock their doors after sundown and don’t go out.”

The predictable “mixed emotions” of that month-long visit, a “time in limbo” that ended when his EB-1 visa was granted, now have their counterpart in his mixed emotions about the United States.

“It’s a weird juxtaposition since President Trump’s election,” he says. “I feel more secure for myself but still have fear for some of the people in my family.”

Insecurity haunts the poetry, “written in a searching, confessional style”, of works like his first full-length volume, 2017’s Unaccompanied, from Copper Canyon Press. In “Let Me Try Again” (tinyurl.com/yyg3tlbw), recalling his journey north at the age of nine, he writes of how “the thin white man let us drink from a hose while pointing his shotgun.”

As Zamora speaks on the phone from the East Coast—splitting time between Harvard, where he’s a Radcliffe Institute Fellow, and his apartment in Harlem—it’s clear that this kind of history continues to occupy him.

“My newer work addresses children at the border and the caravans. That’s what I’ll read for the Idyllwild Arts Writers Week.”

His disarming laughter and warm smile—somehow visible to the interviewer over the phone—seem at odds with these experiences. Perhaps, in Zamora’s case, the strength to laugh and smile is identical with the strength to fight. The Undocupoets Campaign that he founded with Marcelo Hernandez Castillo and Christopher Soto fought successfully to abolish citizenship requirements for a number of major first-poetry-book prizes in the United States and now supports the Undocupoets Fellowship.

But there are even bigger battles to fight. You get the sense that Javier Zamora is happy to fight them.

I am a nomadic artist. I want to see the world to better the world.…