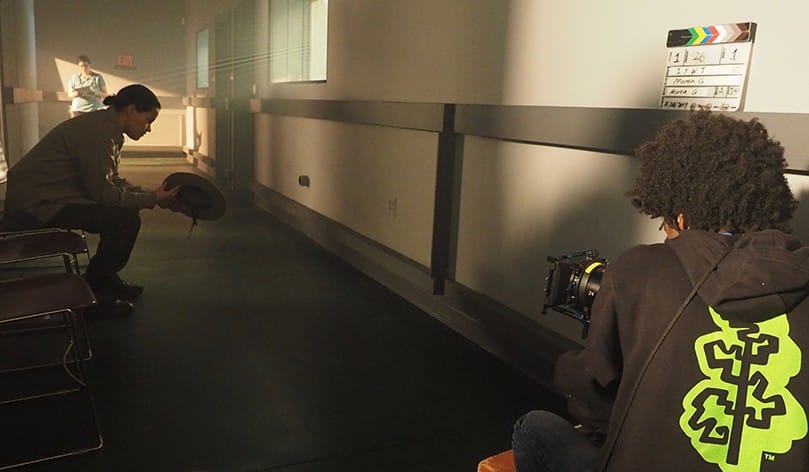 Pictured above: Martin Gerard filming a scene from In You We Trust.

Searching the crowd-funding site indiegogo.com for Arts and Film “In You We Trust” reveals the passion of the Idyllwild Arts Academy Film & Digital Media Department to challenge the sexism and racism of many Hollywood feature films.

That passion is unsurprising. Film-industry veteran Annette Haywood-Carter chairs a department whose students come from ten different countries. But In You We Trust, directed by a nineteen-year-old recent grad and current postgraduate student who embodies the department ‘s diversity like no one else, takes aim at specific reflections of sexism and racism in the first feature film ever created by Academy students.

Martin Gerard is a Haitian-born Belgian citizen who started making films in Ethiopia but now lives in Mexico. His In You We Trust will address domestic abuse and the marginalization of Native Americans as it follows the efforts of a young Native woman to uncover the truth behind murders committed in her small community.

Martin calls filmmaking “one of the most liberating forms of art.” Film’s power to draw upon images, words, and music frees both a filmmaker like Martin and a character like Leela, the young woman at In You We Trust’s dramatic and moral center, to explore self and world in multiple dimensions.

According to Martin, his film will demonstrate the “independent power of a Native American woman.” Yet In You We Trust “revolves around issues of trust: the trust between the forest rangers, the community, and most importantly the people whom Leela trusts in her life.”

Much of the film’s power lies in its subtle treatment of the interrelated topics of independence and trust. Leela possesses the intelligence and strength of character to exercise independent judgment and defy the opinions of others. But to accomplish the healing her community needs, she needs help. She therefore depends on trust, and must learn to recognize people “who are worthy of that trust.”

“Leela’s arc,” Martin explains, “sees her rise from a person who is neglected and discarded to become a person who gains the respect and trust of the people around her.”

The story’s beauty will be deepened by its setting in the natural beauty of Idyllwild, showcased when In You We Trust travels the festival circuit.

The trailer available on indiegogo.com leaves no doubt about the power and passion behind this project.

All That You Forget