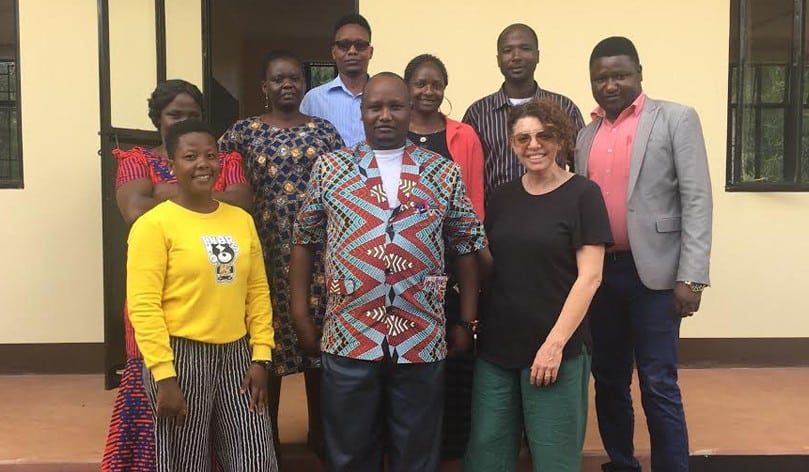 Abbie Bosworth had doubts about her contribution to the Winter Break visit to East Africa with Idyllwild Arts Vice President of Educational Programs Marianne Kent-Stoll.

“Nevertheless, I’d go back in a heartbeat,” said Abbie, Chair of Idyllwild Arts Academy’s InterArts Department. “The people were super-welcoming and kind, fun, sweet, and nice.”

Marianne’s nonprofit, Karimu, has been taking volunteers to the same isolated villages in north-central Tanzania since 2008. Karimu builds schools, houses for teachers so that they’ll choose to stay in the remote area, and medical clinics. Karimu also pursues other kinds of development projects in the villages. Marianne had warned Abbie to expect an appreciative reception, and she hadn’t been disappointed.

“But being warmly greeted isn’t the same as knowing you’re doing something worthwhile,” Abbie said. “Honestly, I feel like everything that I ‘taught’ their teachers, they already knew. It’s just that they’re limited by the conditions in their ability to apply their knowledge.”

The conditions are beyond difficult in a typical village school like Ayalagaya Secondary, whose levels are roughly equivalent to grades seven through ten in the American educational system. The Ayalagaya Secondary School teachers that Abbie worked with are assigned between fifty and a hundred students per class, and Tanzania’s federal government mandates a test-driven curriculum. The conditions are not ideal for the interactive, highly physical theatre games that Abbie draws largely from the Theatre of the Oppressed practices elaborated by the Brazilian artist, scholar, and activist Augusto Boal (1931-2009).

“At Idyllwild Arts, the games are meant to get students to feel comfortable with one another. But the Tanzanian students that I did theatre games with when I wasn’t with the teachers are different from Idyllwild Arts students. It seemed like they were used to engaging in a lot of physical play with one another already—when they’re not working on their parents’ farms or looking after smaller siblings. No hours and hours of video games. As for the adults, they probably expect school to be a place of order and formality. But they certainly haven’t lost their sense of theatre!”

A Mouthful of Water

Abbie described one of the celebratory dances that the villagers performed for Marianne and herself and six other volunteers on their last day in the community, January 9. Part of the dance alluded to Karimu’s recent completion of a project to pipe a steady flow of fresh water to within easy walking distance for fifteen thousand people. Increasing numbers of village households are paying for additional connections to bring the water into their yards. But even the families not doing that no longer need to keep their little girls out of school to spend their days carrying buckets of water home from the handful of wells scattered throughout the area.

“One of the women—we found out later that water is now piped practically to her front door—danced with a bucket of water on her head, never losing step with the other dancers.”

Abbie laughed at the memory.

“At one point she came to stand in front of the others, barely able to contain her smile. She set the bucket down and a man emerged from the crowd of spectators to ladle out a mouthful of water for himself.”

“I’m not sure they need someone like me to show them how to teach more interactively. You shrink the class sizes and the government mandates a less test-driven curriculum, and I expect they’d figure out different teaching methods for themselves. What they need are resources. At the end of my ‘lesson’ in theatre games, the Ayalagaya Secondary School teachers, having got through what they must have considered the waste of time I’d forced on them, turned serious again. They talked about their need for decent housing.”

Abbie was frustrated. She knows Karimu may need a decade to build all the teachers’ houses needed in the community. Meanwhile, teachers will be tempted to leave behind their tiny huts, lacking electricity. They can find much better housing by accepting urban teaching jobs.

However, Abbie had underestimated her contribution to the visit. The teachers and the other villagers certainly need resources. But as Marianne constantly emphasizes, Karimu can bring the right resources only if the organization and the villagers trust one another. The history of development work is full of stories of costly boondoggles, useless projects forced by well-meaning nonprofits on poor people who assumed—often correctly—that what people from rich countries want from the poor is admiration and affirmation rather than dialogue.

Marianne had known, based on her experiences with Abbie in trying to build a trusting relationship with another community very different from Idyllwild Arts, that the InterArts Chair works by listening rather than imposing. By listening, Abbie swiftly gained the trust of the Ayalagaya teachers, who spoke to her with unusual candor.

“There was the housing issue, but they were also frank about the burden of teaching English, as the government requires in secondary schools. The government wants the country to take part in the global economy. Yet you wonder how realistic that is for many of these children. Some will live their whole lives in that remote area.”

She shook her head.

“And even if the world economy finds them, is this an effective way to learn English? One class period a day, learning mainly out of books, and from teachers who aren’t native speakers and who have their own struggles with English!”

“You can be frustrated by the conditions, but I meant it when I said I’d go back in a heartbeat, because the people are remarkable. You know, I was so embarrassed the first time I stomped into a class full of children in my muddy boots. They may have had holes in their sweaters, but their shoes were clean even though they’d had to walk the same muddy path I did.”

“I knew the next day that I’d be meeting different children. I brought clean shoes in my backpack and changed out of the muddy boots before going into the class.”