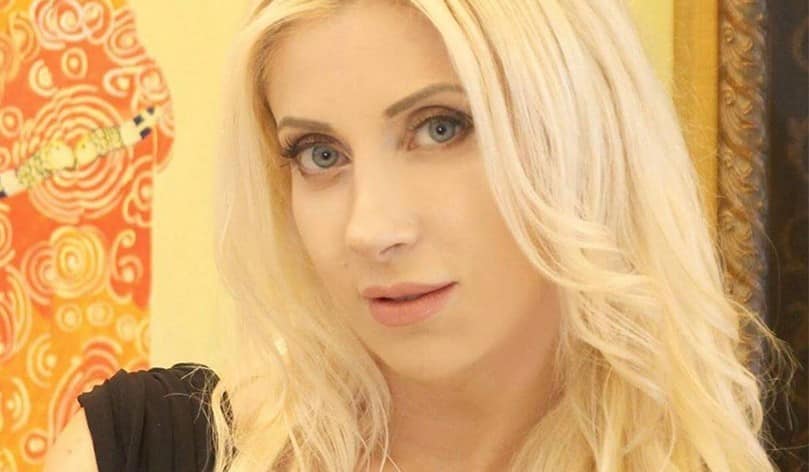 “It was guaranteed after my family took me to a show by the ‘Red Dior,’ Slava Zaitsev.”

Evelina was nine and her native Armenia belonged to the Soviet Union. But Zaitsev’s fame—Pierre Cardin called him “an equal among equals”—implied that even in the country leading history’s irresistible march toward the annihilation of capitalism, fashion mattered.

“Not that the Soviet Union was great for fashion—except fur. . . But around the time I finished school, it fell apart!”

The Soviet Union’s collapse and the uncertain future of the independent Republic of Armenia meant opportunity to Evelina.

“Because of the Armenian diaspora after the genocide, I had family in Paris, New York, and Los Angeles. I went to LA and thought ‘No snow: I’m in love!'”

Los Angeles had Otis College of Art and Design, where she studied fashion, plus perfect weather for outdoor living. The weather suited her evolving aesthetic, which led her to license the name of celebrated former supermodel Peggy Moffitt for an active-wear line. (While publicizing the line Evelina often used her father’s last name, Galli, a common Armenian practice.)

“Peggy modeled Rudi Gernreich’s monokini in the Sixties. The photographs became notorious. Yet to Peggy and Rudi the monokini wasn’t about sex, but about women feeling comfortable in their bodies and their clothes.”

Evelina emphasizes an approach to fashion that she connects to the traditional teaching about nature’s four elements.

“Fashion starts with inspiration. It seems to come from thin air, but you have to be sensitive to what’s around you. Inspiration sets you on fire: you become passionate, take action. But you need the fluidity of water to work smoothly with other people. And your idea should come down to earth as a sustainable garment for a physical body.”

On a beautiful summer morning, Evelina glances at the pine tree shading her.

“Idyllwild is a good place to be reminded of nature.”

Fashion with No Name