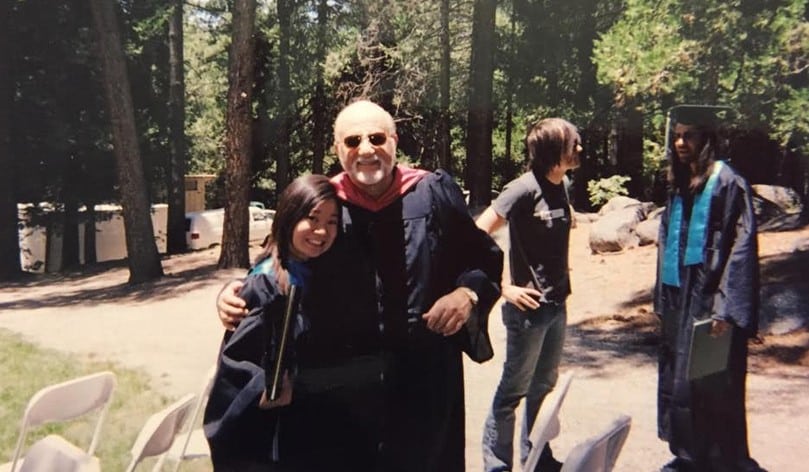 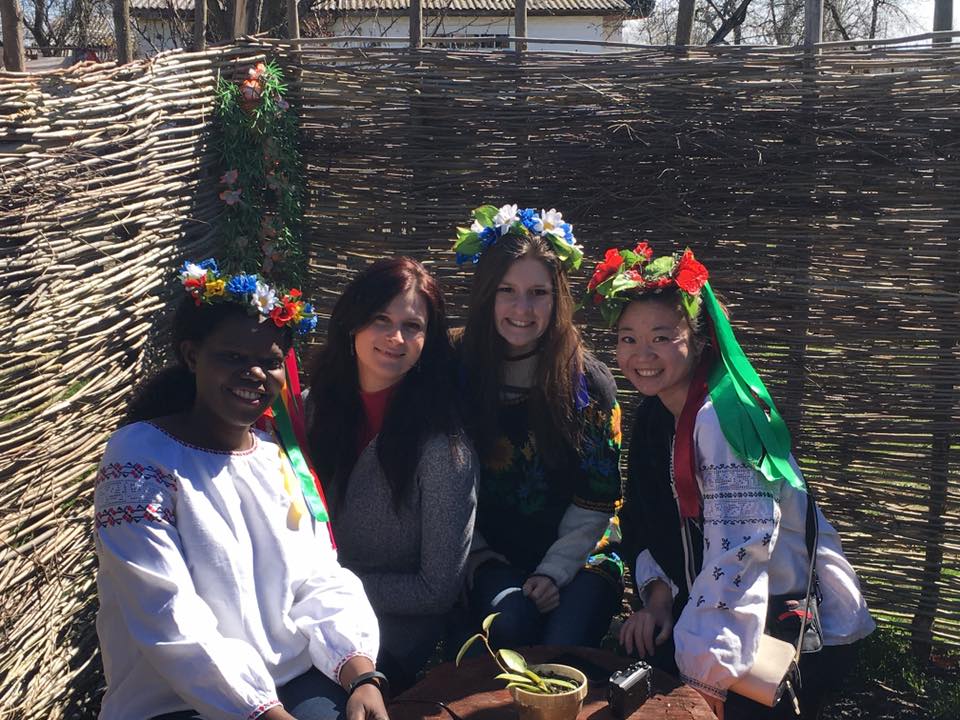 With colleagues from Caritas-Spes Odessa, the Peace Corps’ local partner.

Mayumi had come to Idyllwild Arts from her home in Rochester Hills, Michigan, a suburb of Detroit. Aspiring teenage writers, including screenwriters, often write about faraway or imaginary worlds. But Abrams was struck by the fact that Mayumi’s sketches for screenplays always concerned her family. He wanted to know why.

“What came out of our discussion,” she says, “was that I hadn’t processed my father’s suicide, which took place five years before.”

Abrams encouraged her to face the tragedy.

“Ira suggested making a documentary about what had led to the suicide.”

Abrams had understood the singular, paradoxical power of art—captured by Wordsworth’s definition of poetry as originating “from emotion recollected in tranquility—to create both intimacy and distance.

“If it gets too hard,” he advised Mayumi, “use the camera as a shield.”

Mayumi says that the resulting documentary, screened first on the Idyllwild Arts campus and subsequently lengthened and entered into film festivals, “gave me direction for the rest of my life.”

Part of that direction would involve filmmaking, which, after graduating from the Academy, she went on to study further at Brooks Institute (now defunct), in Ventura, California. Mayumi graduated from the year-round college in 2009.

But another part of her new—and permanent—direction was helping at-risk youth.

“I was troubled when Ira talked to me. I wanted to help other young people as much as he’d helped me.”

The desire to help led to the Peace Corps, for which she has served as a Youth Development Volunteer since 2017, in Ukraine. She has taught at a university in Odessa and also, for the Office of the United Nations High Commissioner for Refugees, made short films that tell the personal stories of refugees.

Inevitably, working with the Peace Corps has brought her into contact with people as generous as herself, like Afghan refugee Ruhullah Ramaki, profiled by Mayumi.

Mayumi’s authorship of the Ramaki piece points to her occupation before, and probably after, the Peace Corps. In between graduating from Brooks Institute and joining the Peace Corps, she reported from the Los Angeles office of NHK, Japan’s national public broadcasting organization. Her teaching assignments in Odessa have included journalism as well as filmmaking, and she looks forward to returning to journalism once her Peace Corps stint has ended.

What draws Mayumi to journalism?

“The world is changing so fast. There’s so much to report on and so much to try to help people understand.”

A Graduate from 2013 Returns

A Bridge from Diversity to Inclusion