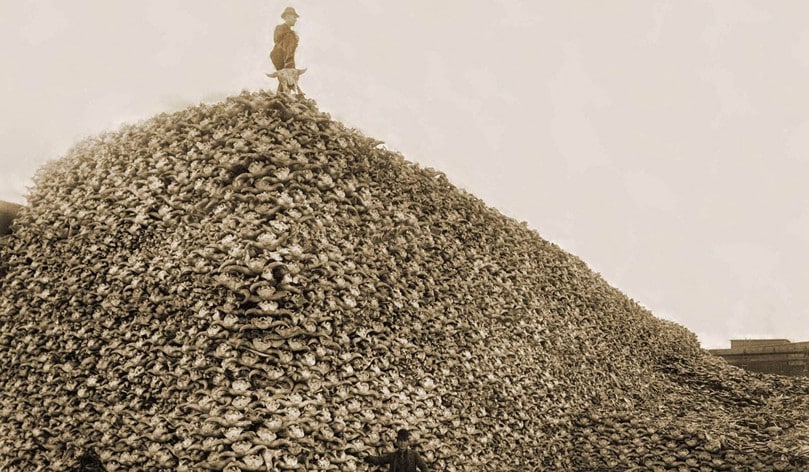 Pictured above: 1870: bison skulls to be used for fertilizer. 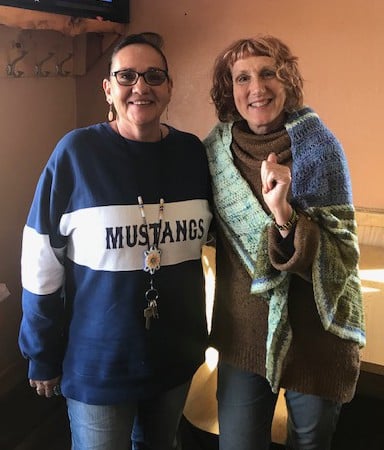 Marianne, Vice President of Educational Programs for Idyllwild Arts, and Abbie, the Idyllwild Arts Academy InterArts Chair, were repeating their October 2018 visit to the Pine Ridge Indian Reservation for the Oglala Lakota Native Americans, in South Dakota. They’re building an educational partnership with the Pine Ridge Reservation that might include artist or student exchanges.

Linda has worked for many years at Little Wound School, a Bureau of Indian Education Grant School for K-12, in the small Reservation town of Kyle. Today she is signaling her devotion to Little Wound by wearing a long-sleeved shirt that says MUSTANGS across the front. The school’s sports teams are called the Mustangs.

In her present role as Coordinator of the Gifted and Talented Education (GATE) program, Linda serves about a hundred of Little Wound’s nine hundred students. The school is named after the Oglala Lakota chief Little Wound, or Taopi Cikala (d. 1899), a powerful advocate for education. Yet Little Wound School’s name might evoke the Wounded Knee Massacre of 1890, which took place some thirty miles to the southwest.

The Buffalo Harvest celebrated by a number of Pine Ridge schools signifies the determination of the Lakota to recover a way of life that the United States Army had hoped to destroy forever at Wounded Knee.

“Have you ever been to a Buffalo Harvest?” Linda asked Marianne and Abbie.

Marianne admitted that during her three visits to Pine Ridge the time had always been too short, her schedule too packed.

Linda, Marianne, and Abbie are sitting at a table in the restaurant of the Lakota Prairie Ranch Resort, just down the road from Little Wound School. They’d all said they were hungry, but they don’t touch their food while Linda talks about the buffalo.

“You know,” Linda says, “in Lakota there’s no word for ‘goodbye.’ We have different ways of saying what would be translated into English as ‘later,’ or ‘again.'”

She pauses to glance down at her hamburger, which is getting cold. The meat is not buffalo, but beef. When people of European descent began spreading across North America, some fifty million buffalo roamed the Northern Plains that included present-day South Dakota. By the time of the Wounded Knee Massacre, fewer than a thousand buffalo remained.

Linda looks up at Marianne and Abbie.

“But those buffaloes were saying goodbye,” she says.