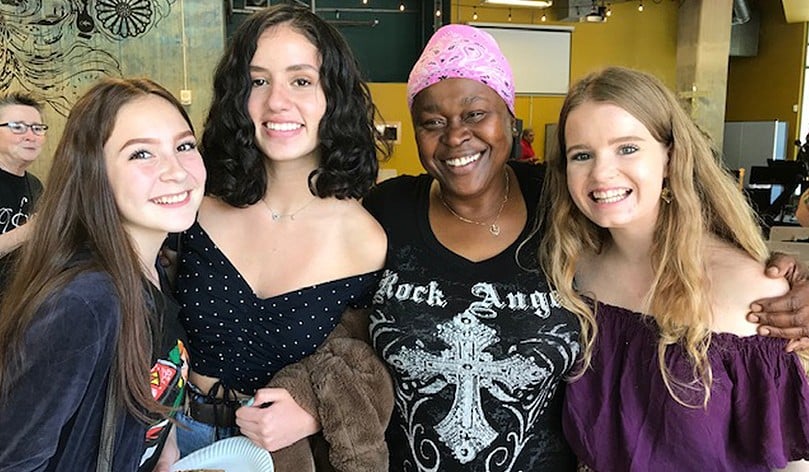 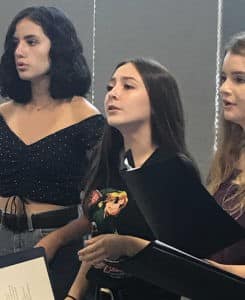 The visit to Idyllwild Arts Academy by the Los Angeles Poverty Department (LAPD) and San Diego’s Voices of Our City Choir had left a profound impression on Academy students and faculty.

The focus of the Academy’s Art in Society program on “practicing art and using it in socially relevant ways” had brought LAPD and Voices of Our City to campus in February for the annual Art in Society Symposium. This one was called “Uneasy Street: Homeless Voices.”

Many Academy students and faculty hoped to see LAPD and Voices of Our City again. So when the Chair of the Academy’s Humanities Department, Dr. Karin Obermeier, proposed a trip to San Diego to rehearse with Voices of Our City, she had willing takers: eight students, Assistant Head of School Marianne Kent-Stoll, Humanities Instructor Angela Horn, and former longtime Academy teacher Andrew Leeson, who drove the school van for the all-day April 26 trip.

Karin contacted Rob Thorsen, a masterful jazz bass player as well as a Voices of Our City staff member and the husband of CEO and Executive Director Steph Johnson. Thorsen said the choir would be delighted to host visitors from Idyllwild Arts. He didn’t exaggerate.

A Joyful Opportunity to Sing

“We were welcomed and given a joyful opportunity to sing,” Karin says. “And our students were totally into it. We ate lunch with the choir and they were thoughtful enough to have ordered pizza because they knew that teenagers were coming!”

They rehearsed songs like “Stand By Me”—using the recording by The Kingdom Choir, the London-based group who performed at the wedding of Prince Harry and Meghan Markle—and “Shining Star.”

The joy of singing may have been exceeded by the joy of hearing that three choir members had just found jobs.

But the choir also struck a somber note in its discussion of plans to resist the San Diego city government’s consideration of a law to prevent people from living in vehicles. Many observers see the law as part of a national trend toward criminalizing homelessness.

The dozen visitors from Idyllwild Arts clearly didn’t see their hosts as criminals.

“We want to make visiting them and rehearsing with them at least a once-a-semester tradition,” Karin says, “and also see if there’s anything we can do to volunteer to help. Plus they’d love to come back to Idyllwild!”