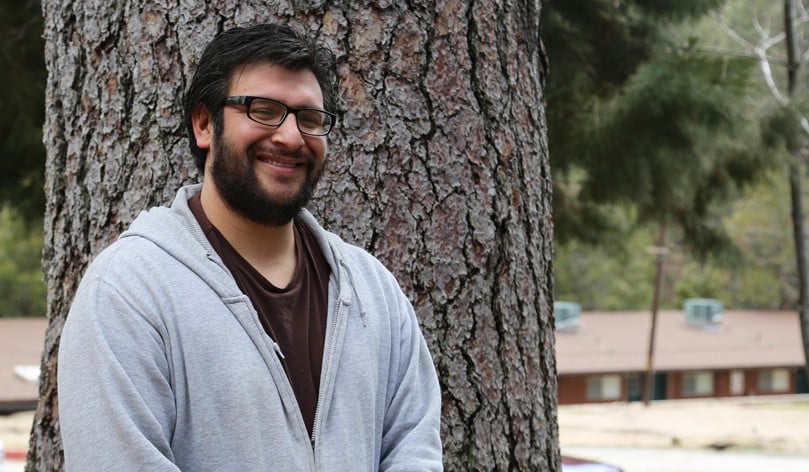 Abbie directed, improvising bravely as her cast of after-school players changed from day to day. Charlie helped with costume and set design for the performance, staged in Red Cloud’s halls and beneath a stairwell. Abbie and Charlie and the young players created enough magic to persuade four Pine Ridge teenagers to register for Teens & Kids classes in the upcoming Idyllwild Arts Summer Program, where they’ll find more magic.

So Abbie couldn’t resist inviting Charlie to Idyllwild Arts to help with a longer devised A Midsummer Night’s Dream, staged by her InterArts students on April 20, outside near the Studio D classroom. Charlie worked with Abbie and her students between March 4 and March 23.

“I paint, I sculpt, I make knives out of old things like rusted lawn-mower blades—sometimes for use, sometimes for the aesthetic appeal—I make my own Halloween costumes. I didn’t mean to frighten anybody the year I did SpongeBob, but kids don’t expect him to be life-size. . .”

Charlie rattles off other kinds of making that he does. It becomes clear that his versatility and flexibility are perfectly suited to the needs of a theatrical piece that Abbie’s InterArts students made up as they went along.

“You can’t just make decorative pieces to put on the set,” he explains, “because three days after you’ve made it out of cardboard somebody might decide that it needs to be sturdy enough to serve as a chair for somebody to sit on. So whenever you build something you have to think ahead and ask yourself what else it might be needed for.”

Charlie has been making things since he was a boy, having picked up the Halloween-costume-making habit from his mother. That was on South Dakota’s Lakota Rosebud Reservation, two hours east of the Pine Ridge Reservation.

“My mother was a pediatrician and my father was a nurse. They always encouraged my brothers and sisters and me to take part in every kind of art.”

He graduated from high school in 2005 and has also studied art at the University of Minnesota and at Sinte Gleska (“Spotted Tail”) University, on the Rosebud Reservation. He often exhibits at Native American art markets in Rapid City and Sioux Falls. This August he might exhibit for the first time ever at the famous Santa Fe Indian Market, even though “New Mexico’s a long drive from South Dakota and packing up my pieces for the trip and packing up what I don’t sell to bring back will be a lot of work.”

The smile that Charlie usually wears can’t disguise the serious intention behind much of his work, including the Michelangelo pastiche on his Facebook page.

Charlie’s interviewer had seen the Facebook page before. Now he brings it up again on his laptop. Charlie reminds the interviewer that in 1862 the sixteenth president ordered the largest mass execution in United States history—not surprisingly, of Dakota Indians.

“I guess Native Americans don’t hold President Lincoln in the same high esteem that many Americans do,” the interviewer says.

Indigenous Peoples, including Tribal nations, in the United States and elsewhere around the globe are…