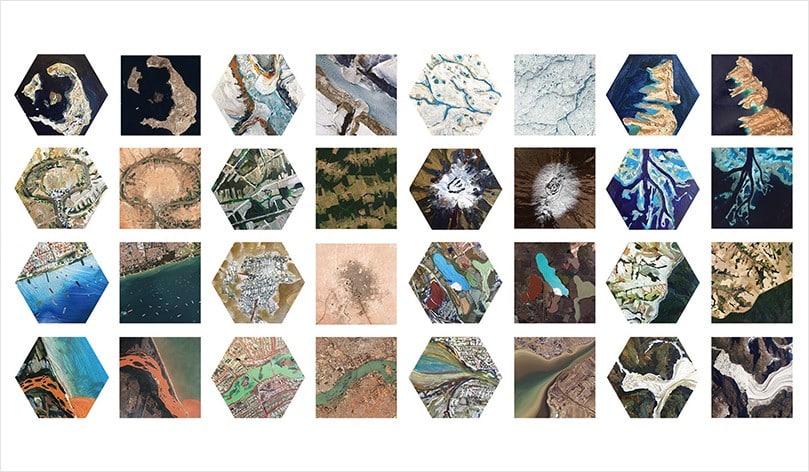 It is my third week at Planet’s art residency. Every day is full of discoveries, idea sharing, meetings, conversations, project planning, preparation, as well as tours at other nearby startups, institutions, and companies. With a growing reading list recommended by employees and visitors (Blue Ocean Strategy, The Machinery of Life, and Scale: The Universal Laws of Growth, Innovation, Sustainability, and the Pace of Life in Organisms, Cities, Economies, and Companies), paired with orientation in all departments of Planet, inspiration is flowing!

Employees recommend I browse their #interesting-pics Slack channel to find stunning imagery for paintings while others suggest specific locations to view on Planet software. They share names of organizations that relate to my artistic pursuits in system’s theory, networks, and ecology like Planetary Society, Santa Fe Institute, Yuri’s Night, Institute for the Future, Astronomer’s Without Borders, SETI Institute, Academy of Science, to name a few. Access to these resources is exciting, existing outside of the art world. Using Planet’s laser cutter, I cut 200+ small hexagons from birch wood. After cutting, priming, sanding, and painting each piece, I set it aside for later use. In two weeks, fellow Planeteers will join me at Late Nite Art to arrange and connect hundreds of hexagon paintings, assembling various shapes. After a chat with Planet’s Co-founder and CEO, Will Marshall, he wants to see paintings assembled into a Dove satellite. Ariel suggests arranging pieces into a DNA strand and Axel recommends building a double-helix in 3D, which he says, “requires math.” Excited to see what our collaborative efforts will create, as employees build this puzzle! Organized Chaos is a series of mixed media systems of aerial views. Planet’s Dove satellites can image 3 meters of resolution per pixel. This provides intricate scenes of geography and cityscapes, but retains individual privacy, where cars and people are imperceptible.

This series directly references satellite imagery while also depicting scenes that exist within a single pixel. The vast complexities of life can be contained within a speck of an image, which provides a powerful message that we all exist in something far greater than ourselves. I am building diverse systems of organizations, both organized and chaotic, close-up and afar. This series provides a “big picture” perspective, to see the Earth in terms of groups, collections, and numbers. Imagine if more people thought in terms of systems, looking outside of their immediate experience to ponder impact and influence at a greater scale.

Pictured Above: Hiking in Medicine Bow, WY for creative inspiration. And yes, I found it.…