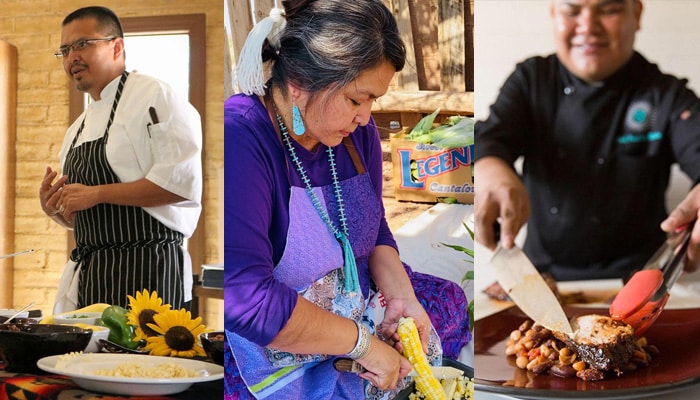 From 5-star restaurants to the intimacy of home kitchens, Indigenous culinary knowledge, creativity and ingenuity have dazzled and inspired taste buds around the world. More important, this Indigenous knowledge in the kitchen strikes at the core of what it means to be sovereign and reclaim Indigenous knowledge.

Cooking has societal impact and helps to bring Indigenous communities back together. Make foods a part of your family again and join us on a journey that will stimulate the senses.

In this three part series, starting Thursday, October 29 at 5 pm PDT/PST, you will engage with practitioners of culinary cultural continuance. Each week, you will learn from educators about their culinary approaches and what feeds their souls with their unique styles of cooking. In each session, you will learn one easy meal, and get the chance to engage directly with the chefs online! The workshop is designed to have you sit, enjoy and watch the session, then create your meal for you to enjoy with your own chosen community of friends and family.

SPECIAL ENGAGEMENT! When you register for this workshop series, you will receive an invitation to an online screening of GATHER, a New York Times critic’s pick. GATHER is an intimate portrait of the growing movement amongst Native Americans to reclaim their spiritual, political and cultural identities through food sovereignty, while battling the trauma of centuries of genocide.

The screening is October 22 at 5 pm PST, followed by Q&A with participating chef from the documentary, Nephi Craig.

Freddie J. Bitsoie (Diné), is executive chef, Smithsonian National Museum of the American Indian (NMAI) Mitsitam Café in Washington, DC. He also owns FJBits Concepts, which specializes in Native American foodways. He travels widely, presenting for organizations including Kraft Foods, College of the Holy Cross, Yale University, and the Heard Museum. Freddie hosts the public TV show Rezervations Not Required, and has appeared in and contributes to many publications. He won the Native Chef Competition at the NMAI in 2013. Freddie studied cultural anthropology and art history at Arizona State University before attending culinary school.

Jennifer Jackson Wheeler, Diné/Navajo, is originally from Many Farms, Arizona. Belonging to the Yoo’í Dine’é and Kin Yaa’áanii clans, she credits her knowledge and teachings of traditional foods to her mother and grandmother. With a bachelor’s degree in English Education from Northern Arizona University plus a Master’s and Ph.D. in English from Arizona State University, Jennifer has been teaching English and Navajo language for over twenty years. As a cultural consultant, she focuses on sustainability and revitalization of Navajo/Indigenous languages and educating communities on strengthening family values through culturally-responsive practices, including demonstrations of traditional and modern Navajo foods.

Nephi Craig is an enrolled member of the White Mountain Apache Tribe and is half Navajo. Chef Craig is also the Founder of The Native American Culinary Association or NACA, an organization/network that is dedicated to the research, refinement, and development of Native American Cuisine.