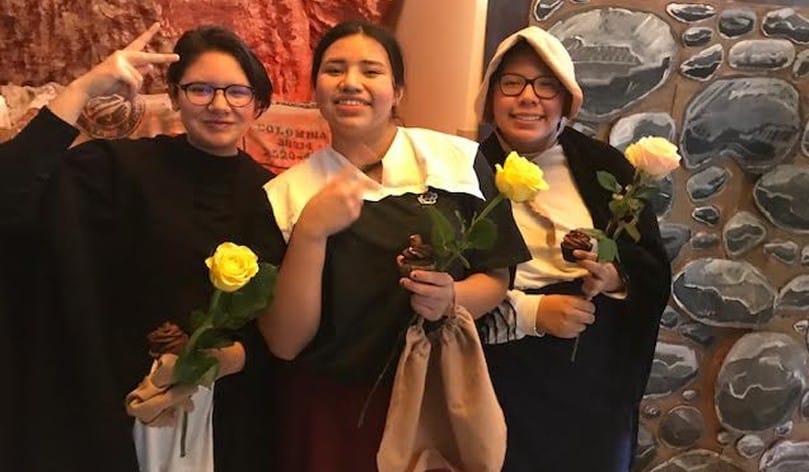 Working with Oglala Lakota students at Red Cloud Indian School, on South Dakota’s Pine Ridge Reservation, Abbie had generated enough fun and interest to attract three of the students who performed to the 2019 Idyllwild Arts Summer Program—and word of mouth had brought a fourth child, who wasn’t a Red Cloud student, to the Summer Program.

Abbie’s greatest achievement may have been to serve as an ambassador for the entire Summer Program, and not merely for her own specialty of Theatre. The students enrolled in Theatre, Creative Writing, Visual Arts, and Songwriting courses, respectively.

With Abbie having successfully played Pied Piper, the Summer Program’s own outstanding virtues did the rest: all four girls talk about wanting to come back for the 2020 Summer Program, and at least one—now a ninth-grader—is looking forward to applying to Idyllwild Arts Academy in a couple of years.

The student who did Creative Writing, Charlize, says that “Just being in California was great” and “I was able to make some new friends.” For these reasons, as well as the fact that “The program expanded my knowledge of poetry,” she has “already recommended Idyllwild Arts to my friends.”

Lily, who did Songwriting, “made songs every day” as the instructors “taught us song structure” and one of them, Don Reed, “taught me how to play bass so that I could help other students by playing bass on their songs.” Not only that, but “The food was delicious” and “I made a friend from Russia and one from Ukraine.”

And Daveigh, the Visual Artist, who remembers that “Rachel Welch was my teacher” and “It was really fun,” happily says that she still has “a lot of my artwork from Idyllwild hanging up at home.” She agrees that “The food was really good” and she enjoyed rooming with a girl from China who “didn’t know anything about Native Americans.” She also says “I wouldn’t change anything about” the Summer Program and that “I want one of my brothers and my sister to go back to Idyllwild with me.”

Finally, Tsenessa, who enrolled in Abbie’s summer Theatre class so that she could learn more from her, wants to return to the 2020 Summer Program. She has also continued the independent reading of Shakespeare that Abbie’s production of A Midsummer Night’s Dream inspired. 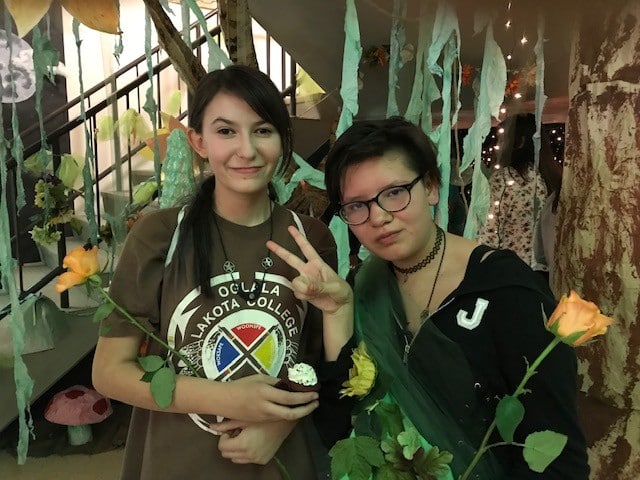 On the “Midsummer Night’s Dream” set.

A Different Kind of Play

Abbie’s Red Cloud contacts asked her to direct a different kind of play during her October 2019 visit: Arthur Miller’s The Crucible.

But they responded sympathetically to the play’s examination of universally intelligible subjects like jealousy, mob mentality, compassion, and forgiveness.

“And it was easier than doing A Midsummer Night’s Dream last year was,” she says, “since I had the same students who had so much fun last year wanting to perform again.”

In a restaurant in the Black Hills, during lunch on her last day in South Dakota, Abbie reflected on her Pine Ridge experience. In the morning she’d visited Wind Cave National Park, sacred to the Lakota as the site of their birth as a people. In the afternoon, before boarding her flight home to Southern California, she would have a little time to see the controversial Crazy Horse memorial.

“Teaching at Idyllwild Arts is wonderful because we have everything we need to put on a play or a fashion show,” she says. “And then you go to a place like Red Cloud, which has strong academics but no regular arts programs and no theatre. You have to perform in the school’s halls and under a stairwell, so it’s challenging.”

She smiles, and not only because the server has just brought a slice of German chocolate cake, smothered by vanilla ice cream.

“But there’s a big place in my heart for places where it’s challenging.”

Dear Idyllwild Arts Community, Last year, when the Class of 2020 returned to campus for…