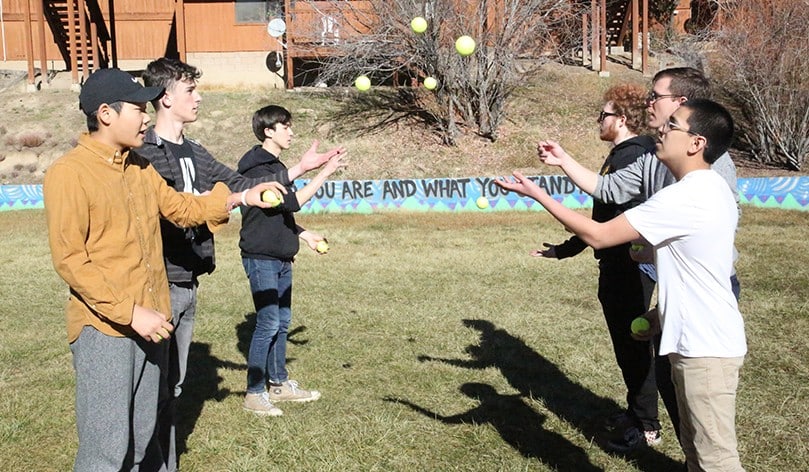 “There exists a harmony between science and art,” Dan says.

His interviewer wanted to believe him. But the interviewer recalled one of his unhappiest high school experiences: butting his head up against the impenetrable axioms of trigonometry. Until trigonometry stopped him cold, his math progress had been considered excellent.

“The problem is how math is taught,” Dan replied confidently. “It’s usually taught not as a means of discovery but as a means of calculation, which is dry and boring.”

He was sitting outside on the Idyllwild Arts campus.

But he made a modest concession to the crisp November afternoon by slipping a lightweight cardigan on over his long-sleeved plaid shirt. His necktie brought a touch of his native Massachusetts to a campus where ties are rarely seen.

“But if you can get students to participate actively in discovering that math is about relations between real things,” he continued, “and especially if you can get them up on their feet and moving around, feeling the kinetic energy that math describes. . .”

Not feeling that energy as a high school baseball player led him into juggling.

“In baseball you spend a lot of time standing around. I’m not good at that: I love break dancing, hip-hop dancing, beat-boxing. . . stuff like that.”

Baseball supplied a prop made to order for another kinetic pastime as relief from the standing around—though just one third of the number of balls needed for the three-ball juggling that Dan can be seen practicing in videos like:

He has continued juggling at the University of Massachusetts Amherst, where he majored in biology, and throughout ten years of teaching. The three hundred-plus juggling patterns he’s developed are entertaining, but also something more than that.

At vimeo.com/danjaworski/about he explains that the patterns represent an “endeavor to discover complex movements that reflect the basic geometries found within the natural world,“ adding at vimeo.com/danjaworski that their beauty celebrates “the poetry of the universe and the geometry through which it sings.“

So juggling illustrates his cherished “harmony between science and art.”

Partly because “the sun here has made a big difference to my energy level,” Dan loves Idyllwild Arts so far.

If he can keep communicating successfully the “harmony between science and art” needed to make the school’s dual arts-and-academics curriculum into a coherent whole, Idyllwild Arts will love Dan back for many years.

Reina Meek had spent three years in Saudi Arabia. She lived in Ras Tanura on…