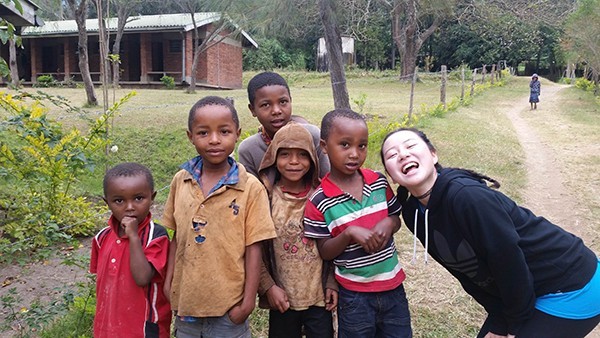 “After all that hard work, the kids would come and call my name. It was really fun!”

The children who spent the most time with Ayana Homma were Bry, Polo, Petrolina, Babu, and Obama — “although there were a lot more,” she says.

Playing with children at the end of the day never tired her out. But why should it have, since shoveling dirt, rocks, and wet cement had not exhausted her?

“I stopped trying to keep up,” Kelly Kent-Stoll admits. “I worked as fast as I could, but then I’d see Ayana doing two shovelfuls for every one of mine.”

This June and July, Ayana and Kelly were among fourteen volunteers who helped skilled local workers build a maternity ward for a cluster of remote villages in the East African nation of Tanzania. Marianne Kent-Stoll, starting her fifth year as Idyllwild Arts Academy’s Dean of Academics, has led annual visits to the villages for nearly a decade with her husband, Don Stoll, Academy Manager of Communications and International Student Relations. Each year since 2013 their volunteer teams have included Idyllwild Arts students like Ayana, a Songwriting major from Tokyo who is scheduled to graduate in 2018.

While Marianne and Don’s nonprofit, the Karimu International Help Foundation, has usually focused on renovating and expanding schools and on clean-water projects, this year the villagers requested a modern maternity center. In Tanzania, childbirth produces about seven times as many deaths among babies, and twenty-five to thirty times as many deaths among mothers, as in the U.S. Marianne with a midwife friend, Esther.

Kelly, Marianne and Don’s younger daughter, who celebrated her thirtieth birthday in January, had not traveled to Tanzania since 2008. She was delighted not only by Karimu’s accomplishments during the previous eight years, but by Ayana and the other Idyllwild Arts students.

“I was nervous about hanging out with high school kids for three weeks, but they were great volunteers.”

The experience was so rewarding to the Idyllwild Arts students that they made a pact to return together on Karimu’s 2018 trip.

A teenager’s plans can change overnight. For now, though, Marianne and Don are happy that Ayana, Victoria, Janice, Robin, Martin, and Frankie have gone once, worked so hard, and been so impressed by the villagers.

“I live in a gated community in São Paulo,” Victoria says, “so when I came home to my room I turned the light on without thinking, and I can have all the water I need any time, and I can get it hot. But the people in the village were so happy and welcoming and they treat you so well. Being poor and being unhappy are so different. . . which is a funny thing to say.”

Victoria is not the first Karimu volunteer to touch on the strangeness of working with poor people whose lives are rich. But she and other volunteers and Marianne and Don recognize that the full lives of the villagers do not make their needs for better schools and better medical care and clean water unreal. The reality and seriousness of the needs simply make their ability to enjoy life more admirable. And that makes them a serious joy to work with. Marianne plans to share the joy with Idyllwild Arts students for many more years.

She and her husband were already thinking about the 2017 visit after examining the deteriorating water situation in one of the villages. Gadgel’s well is drying up and must be accessed by a rusty hand-pump that a child cannot operate alone. Residents walk up to three miles to carry water in buckets on their heads.

Marianne and Don keep going back because of the need, but also because the villagers have become their friends, just as many villagers quickly befriend the volunteers.

“I got close to two little girls who were always with us,” Victoria says. “Their names were Mariana and Emmanuela.”

What about Bry, Polo, Petrolina, Babu, and Obama?

“I still have them as my screensaver!” Ayana says.