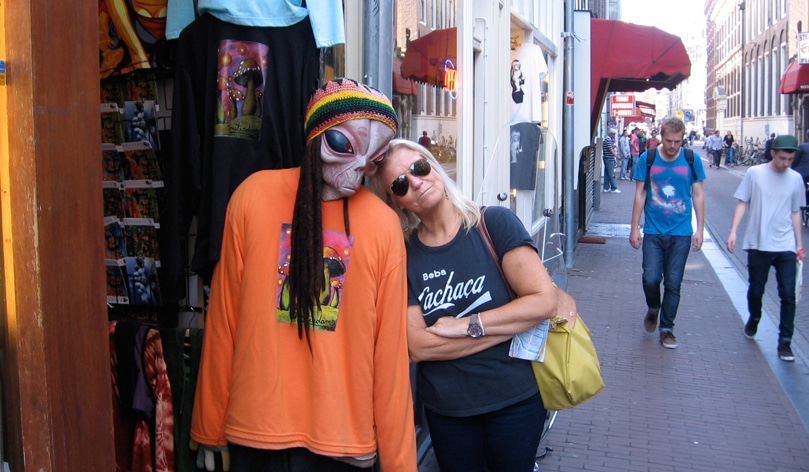 Karen Johnson talks about fashion with an energy seemingly at odds with her recent bout with cancer. The Idyllwild Arts Academy Fashion Design teacher has enjoyed a long career, yet she discusses every aspect of it with a youthful spirit that suggests she must have been a perfect fit as Esprit’s children’s designer, which she was for eight years.

“Children’s clothing is more playful and less serious than clothing for adults,” she says. “And I love color.”

As successful as Karen has been at playing with fashion, her success might have come in music if she hadn’t broken up with a boyfriend back in the early Seventies.

“He lived in Florida,” she recalls. “I was looking at going to Rollins College, in Florida, for music, but after I broke up with him, I decided on Stephens College, in Columbia, Missouri, which had a very good Fashion program.”

She’d been raised in Illinois, Michigan, and Ohio, so Missouri might have seemed more like home, anyway—except that another coast beckoned.

“While I was at Stephens, I did a year or two at San Francisco State. I graduated from Stephens in 1977, but I’d already decided I was going back to California.”

In San Francisco, Karen worked for a small company that had found a niche making women’s golf clothing.

“They liked it that I had a degree, so they could call me a ‘designer.’ In fact, I did everything.”

Esprit Holdings Limited is now headquartered in Hong Kong and Germany. But forty years ago, the company was just Esprit, and it was still based in its founding city, San Francisco. That was where she went to work for Esprit as a pattern-maker before moving up to become the children’s designer.

Clothes for Every Body 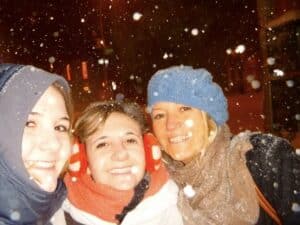 In New York with daughters Sophie and Sami Prescott.

Esprit was a big company, and getting bigger. But it wasn’t big enough to hold Karen’s creative impulses forever. She went on to put her creativity to work as a freelancer for Gymboree, with a company of her own called International Youth Apparel, with Eagles Eye and what she calls their “really beautiful ‘ugly sweaters,'” and with Aeropostale, in New York.

And since human beings aren’t the only species with a craving for style, she also started a pet clothing line called Lulu Pink that at one time occupied sixteen feet of shelf space in WalMart.

Her career had her living in Philadelphia as well as New York, and traveling the world—”I’ve been to South Africa five times”—but eventually she returned to California, buying a house in Palm Springs in 2010. A chance meeting in Los Angeles with Idyllwild Arts InterArts/Fashion Design Chair Abbie Bosworth brought her to the Academy.

Though most of her designs have been for young people (and dogs of all ages), Abbie was quick to recognize Karen’s consummate skill in designing for every kind of body.

“Basically, designing clothes is building a model around a shape. The point is to be sensitive to what’s attractive in a body’s shape so that you can build models to enhance the attraction.”

Like the most dedicated artists, she is curious to see what creations will come next.

“The coming big thing is 3D fashion design and building clothes around avatars.”

It’s clear that Karen possesses a youthful spirit that wants to grow right along with the coming big thing.