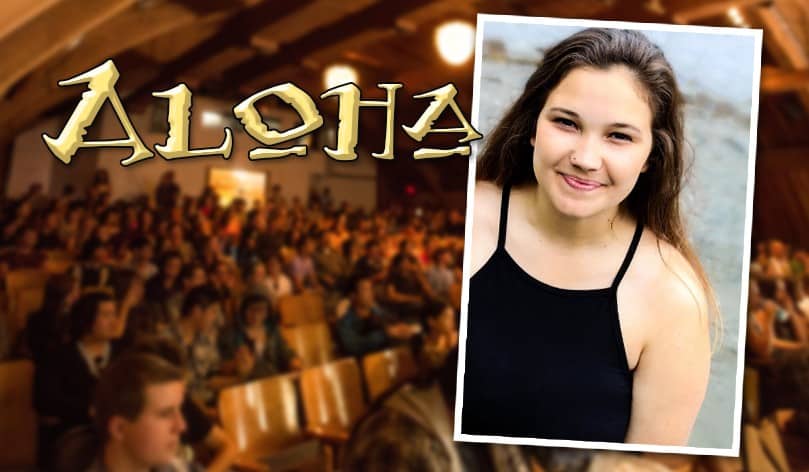 A critic of one of Madison Gerringer’s favorite plays, Naomi Iizuka’s Aloha, Say the Pretty Girls, wrote that “Sometimes ‘Aloha’ means we don’t know if we’re coming or going”, going on to suggest that the Iizuka work is aimless.

But Madison, co-star of Idyllwild Arts Academy’s production of Aloha shortly before her 2013 graduation, might respond that coming and going at the same time is simply what people her age do. Iizuka recognizes the transitional nature of lives that have recently come out of childhood and are excited about going places.

“I have no idea where I’ll end up permanently,” Madison says, “but as a stepping stone my job is a dream: a perfect step for me right now.”

She works in Lafayette, California, as Director of Education for Town Hall Theatre, whose President is another Idyllwild Arts alum, Lauren Rosi ’03. Lafayette is thirteen miles northeast of Oakland, a dream location because Madison is a Bay Area native.

“The Bay Area was always in my heart in Boston, at Emerson College.”

But the job also fulfills a wish—as Freud said dreams are meant to do—to continue working both in her Idyllwild Arts Musical Theatre major and in her Emerson major of Theatre Education.

“I particularly like big ensemble-based pieces: Fosse musicals, or Cabaret. My main goal is to become a professional director, but at Town Hall I’ve come to love working with middle-schoolers.”

“An acquired taste. The hardest time of growing up, though, and I think I can help with that.”

And since she’s still growing herself—still at the age of both coming and going—she has a “five-or-ten-year plan” that includes “grad school in a few years.”

For grad school she has “looked at London and Dublin,” since “It’s important as a theatre artist to see the world.”

She asks the time and her interviewer replies.