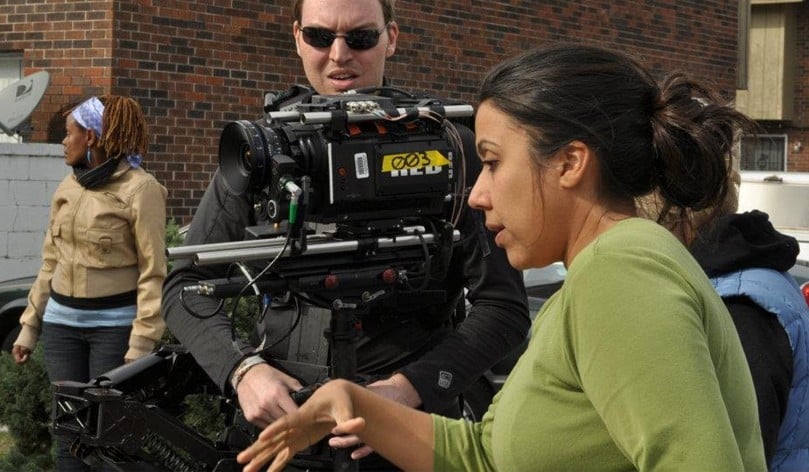 Anyone who pays attention to the voluminous credits rolling down a screen at the end of a film will notice a number of mystifying job titles. Does every filmgoer know what a “gaffer” does? Or a “best boy”?

But Catalina Alcaraz-Guzman, Idyllwild Arts Academy’s new Film & Digital Media teacher, has done a job that a lot of movie-lovers won’t even have heard of: “creative producer.”

“Having a great script might not be enough to get people and financing behind making a film,” she explains. “There’s a big gap between looking at words on a page and visualizing the idea behind the words. So it can take a lot of work to entice creative people and business people to take part in that translation of script into film.”

“For example, you can put together a look book that includes sketches of characters and photographs of locations and so on. And you can show the people you’re trying to entice a proof of concept: maybe some test footage, some animation, an animated scene, a video collage that helps with the visualizing of the film. And visual materials not found in the look book might need to be produced as needed, depending on the project.”

Doing work of this kind, plus the work more commonly associated with film producing—finding people to work in front of and behind the camera, coordinating their schedules, finding locations, arranging financing—has earned Catalina a “co-producing” credit for a forthcoming feature about Hollywood legend Mary Pickford (1892-1979). Called Why Not Choose Love? A Mary Pickford Manifesto for limited screenings this past summer, the unconventional biopic might acquire a new title for its general release.

“That was almost three years of my life!” Catalina says. “But it’s worth it when you’re doing what you love.”

Idyllwild Arts Film & Digital Media teachers tend, sensibly, to specialize in particular aspects of filmmaking, passing those skills along to their students. High-caliber filmmaking demands expertise in screenwriting, cinematography, editing, and the like.

But all of the Academy’s Film teachers also emphasize the fact that—possibly to an extent rivaled by no other artistic discipline—filmmaking is a team sport. And for the good of the team, individuals must sometimes stretch themselves to perform tasks outside their areas of mastery.

“That’s one of the things I hope to instill in the students here,” Catalina says. “So I’m eager to teach everything from Visualization to Producing and Directing.”

The native of Medellín, Colombia, is also excited about relating filmmaking to the wider Idyllwild Arts Mission of “Changing lives through the transformative power of art.” The Mission is expressed in the goal of Art in Society to “work towards creative solutions to the world’s problems,” as well as by other Idyllwild Arts programs.

“I grew up during a time of great violence in my country. As a teenager I became active in combating it, and through my experiences I developed a strong belief in the power of young people to make a difference in the world.”

Adding that “I think I’ve found the right artistic medium to make a difference,” Catalina goes on to describe the path that brought her from Medellín to Idyllwild.

“B.A. in 2007 from Castleton State College [now Castleton University] in Castleton, Vermont. In 2013 my Master’s degree from Savannah College of Art and Design, in Georgia, where due to motherhood I took four years to do a two-year degree.”

“Doing commercial work and training videos in Ticonderoga, New York, with my own company, Catacombo Productions. Freelancing in New York City, where I also served as Artist in Residence with Reel Works, helping young people make films. Back in Georgia with the Savannah Regional Film Commission, marketing Savannah to the world and also supporting the local filmmaking crew in their work with people from outside who have agreed that Savannah is a great place to make films.”

Catalina pauses. Her interviewer is grateful for the pause because Catalina has done so much that his hand is tired from taking notes.

But the interviewer is also grateful that Catalina has come to Idyllwild Arts, where it’s clear that she’ll continue to do so much to benefit students.